Cavs send the enigma out of town 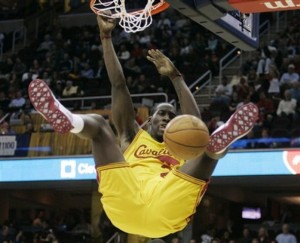 The Cleveland Cavaliers finally decided they had seen enough of the enigma that is J.J. Hickson, trading the third-year forward/center to Sacramento for small forward Omri Casspi.

The Cavs also receive a lottery-protected first round pick from the Kings as the team works to rebuild the franchise and stockpile draft picks.

“This is another step in our on-going process to shape and position our team and roster for future growth and a platform for sustained success,” general manager Chris Grant said in a press release. “We’re excited to add a young, talented, tough-minded player like Omri, that we feel is a good fit for our team and can help improve our perimeter group, while also being able to obtain another important asset with the additional first round draft pick.”

Both players are 67 percent free-throw shooters, but Casspi is a better outside shooter.

Casspi fills a need on the Cavs, and moving Hickson alleviates the logjam the Cavs had at power forward after drafting Tristan Thompson.

As for Hickson, he was one of those divisive players that we always seem to have here in Cleveland. He showed just enough talent at times to make some fans think he was the second coming of Larry Nance, but was inconsistent enough to make just as many fans crazy.

And it became clear last season that Byron Scott was frustrated with him.

“It’s just lack of focus. He wants to do it, but sometimes he’s 22 years old and he comes to practice and he’s not focused,” Scott said before the season started. “This is a job and something you have to take seriously. There’s nobody in that locker room that has an excuse because they have a video playbook and they have a playbook. They can go home and watch it on DVD, go home and open the book up and we’re always available. So there’s really no excuse. He has to get a little better and take it more seriously.”

That right there sums up Hickson: in three years he just wasn’t able to focus and take things seriously enough through two coaches with two different systems. Clearly the Cavs were tired of waiting for him to figure it out.

Do they run the risk of Hickson turning into a superstar? Maybe, but the gamble is worth the risk. If all Thompson does is show up every game prepared to do his job, and Casspi can be a decent player, the team will have come out of this deal OK.

As for the Cleveland Indians, they have to be glad that June has finally come to a close.

The Tribe ended May in first place by five games over Detroit with a record of 32-20. After a dismal 10-17 record in June, the Wahoos find themselves in second place, a half-game behind the Tigers.

So while people are grumpy that the early lead didn’t last, the Tribe is only a half-game out of first. That’s the important number to focus on, especially when you look at the team’s record the past few years on the last day of June:

The last time they were this close to first place heading into July was 2007, when they finished June in first place by 1.5 games.

One thing that is keeping us up at night about the Indians, other than the offense, is the workload of starting pitchers Josh Tomlin, Carlos Carrasco and Justin Masterson.

As the Indians stay in the pennant race, they are going to rely more and more on the trio, which have been the team’s best starting pitchers in the first half of the season.

But what’s going to happen in August and September when the innings start to pile up?

Tomlin has thrown 102.2 innings in 16 starts this year; he only pitched 73 innings on the big-league level last year.

If one or more of these three come down with a dead arm later in the season, the Tribe could really be in trouble.

2 thoughts on “Cavs send the enigma out of town”