A blessing in disguise? 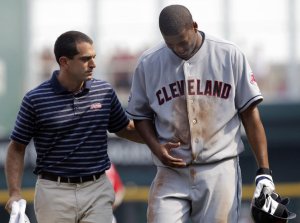 Looks like Fausto Carmona will potentially only miss one start after injuring himself while trying to run a mere 90 feet on Saturday.

Carmona will miss Thursday’s game against Toronto, but thanks to the All Star break he will be ready to return to the rotation on July 18 against Minnesota – if everything goes OK.

Is it wrong if we kind of wouldn’t be upset if everything didn’t go right with his rehab and Carmona missed a few extra starts?

Carmona has been a mess this season and some extra time off might help him get his head on straight and actually start pitching like a Major League starter.

With the Tribe expecting to call up either Zach McAllister (8-3, 2.97 ERA at Columbus) or Jeanmar Gomez (9-2, 2.26 ERA) to start on Thursday, there may not be a rush to get Carmona back on the mound.

Unfortunately, it doesn’t sound like the team is thinking that way.

On a related note, we could not agree more with Sheldon Ocker at The Beacon Journal about the absurdity of the National League insisting on not having a DH.

The notion that having pitchers bat somehow makes the game more “pure” is nonsense; it’s just ridiculous. As Ocker rightly points out, if the NL teams think watching a pitcher try to swing a bat is so important, why don’t they keep the pitcher in the lineup when they visit American League parks?

Adding an extra bat to the lineup doesn’t hurt an NL team when it plays in an AL park, but taking the DH away from the AL clearly is unfair. We can’t help but think that having Travis Hafner in the lineup full time on this past road trip wouldn’t have helped out.

Of course, if Carmona was athletic enough to run 90 feet without hurting himself, we probably wouldn’t be having this conversation.

So we’ll wait to see how Carmona’s rehab progresses and hope for the best. It’s the Fourth of July, the Tribe is in first place and the Evil Empire is in town.

What could be better than that?