New sheriffs in the Browns secondary 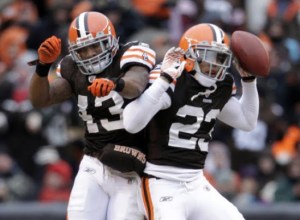 We really liked what we heard last week from second-year defensive backs Joe Haden and T.J. Ward as they talked about their expectations for the upcoming season and their plans for taking on greater leadership roles with the team.

“As a rookie, you can come in and be a leader, but how are you going to tell a 10-year veteran how to do something when it’s your third game?” Haden said in published reports. “This year, we have a year under our belt. We feel more comfortable not wondering how you’re going to feel in Week 7, how are we going to feel in Week 8. We feel more comfortable. We know what’s going on. We know the system we’re in isn’t going to be too hard.”

One thing that really stood out is both players seemed charged up about the switch to Dick Jauron’s defensive system.

“It’s not going to be as difficult as our defense was last year,” Ward said. “We had a bunch of schemes and a bunch of techniques and calls that, I think at times, confused some of the guys on defense and maybe our cohesion wasn’t there as well last year. But I think this year it’s more basic and you just use your athletic ability and skills as a football player to make plays.”

“When we’re looking at the scheme as the defensive backfield, one thing that (defensive backs) coach (Jerome) Henderson said was they are going to put you in a position so you can make a play,” Haden said. “It’s more you versus your opponent, you versus the man across from you, more than trying to beat them mentally.

“I like my chances. I like T.J.’s chances. I like (cornerback) Sheldon’s [Brown] chances. (It should help knowing) what you got to do, just being really confident in the play call.”

The comments about the defensive system being simpler this year stand out even more now that cornerback Eric Wright has left the Browns and signed with Detroit.

We’re not going to bag on the previous regime, especially on the defensive side. But the comments about how the system may have been overly complicated last year helps explain why the secondary struggled at times, most notably against Baltimore in Week 3.

How much of the problems – which were magnified in that game – were the result of a coaching staff trying to do too much with a relatively inexperienced secondary?

Wright was ripped for his performance in that game and never seemed to fully recover, at least in the eyes of many fans.

“It’s hard to dig yourself out of that type of hole when you have the worst game of your career,” Wright told The Plain Dealer over the weekend. “Then, the team’s losing, and we had a young corner in Joe Haden who looked great playing. There was a lot of negative attention around my struggles, and it was hard to overcome.”

And off-season comments from Browns GM Heckert – “We thought we had three really good corners. Eric Wright, whatever happened to him I have no idea. If Eric Wright would have played like he played the year before, we probably would have had one of top (groups of) three guys around. But Eric Wright didn’t play very well.” – clearly didn’t help Wright feel wanted in Cleveland.

Additionally, Brown thinks Wright would have been a good fit for Jauron’s system.

“I knew the staff that they were bringing in, I knew the system, and it’s a system that he would’ve really loved,” Brown told The Plain Dealer. “I wish him the best of luck. I know he’ll do well wherever he goes because he’s a talented player.”

So while we’re a bit worried about the team’s depth at cornerback – shades of last year – we’re encouraged by the attitude of the players who are still on the team.

Receivers around the league have been warned.

One thought on “New sheriffs in the Browns secondary”