A whole week of the other 42 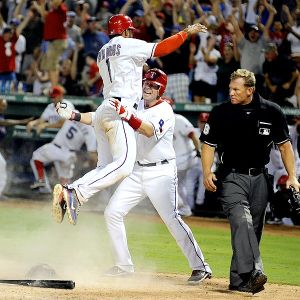 Early in the season, Indians manager Manny Acta pointed out that every team wins 60 games and loses 60 games – it’s what you do with the other 42 that count.

Well, we’ve just spent quite the week learning about those other 42 and it hasn’t been good news for the Tribe.

Tuesday night it was Jarrod Saltalamacchia scoring from second on a single in the bottom of the night to beat the Indians. Wednesday, it was a Jacoby Ellsbury home run with two outs in the ninth.

But that was nothing compared to Friday night.

The Indians blew leads of 3-0, 6-2 and 7-2 before finally falling to the Rangers in extra innings as Elvis Andrus somehow scored from second base on a ground ball to shortstop in the bottom of the 11th.

There was plenty of blame to go around Friday night.

The offense shut down after the third inning.

Closer Chris Perez gave up a two-out, game-tying two run homer to Michael Young in the bottom of the ninth.

Rafael Perez threw a wild pitch – the Indians second on the night – in the 11th to allow Andrus to get into scoring position.

Then there was Matt LaPorta.

On Andrus’ game-winning score, LaPorta fielded Asbrubal Cabrera’s throw which just missed nailing a sliding Josh Hamilton for the third out. LaPorta looked at first base umpire Derryl Cousins before throwing to the plate, and that split second allowed Andrus time to score.

LaPorta’s ongoing lack of baseball sense proved costly – and was not missed by Acta.

“You catch the ball and throw home,” Acta said in published reports. “You don’t worry about whether the guy is going to be safe or out, you come off the bag and you throw home — that’s the winning run. That’s what you do.”

Acta has to take his share of the blame as well.

With two on and one out in the 10th, Acta let Shelley Duncan – back on the team because Jack Hannahan is on paternity leave – bat rather than pinch-hit Travis Hafner.

Duncan had homered in the third inning and had two hits on the night, so expecting him to come through again was really pushing the odds. Predictably, Duncan hit into a double play.

“It was a complete day off for Travis,” Acta said. “Hafner shouldn’t even have been a temptation in the 10th. We should have won it in the ninth.”

We get that you want to give someone a day off, but shouldn’t the game situation play a role in your decision? Last night was not Actaball at its finest.

The Indians are now four back of the Tigers, having lost three games in the standings over the past 10. The season isn’t lost by any means, but things are starting to get serious.

With the Tigers coming to town next week for three games, the Tribe really can’t afford to fall any further back in the standings than they already are.

As it is, they are looking at needing a sweep next week because, even if they take two-of-three, that only shaves one game off the deficit.

After the way this week played out, it’s getting harder and harder to see that happening.