Are closers overrated in baseball? 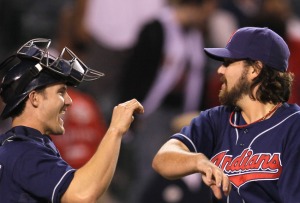 The Cleveland Indians reconfirmed something last week that we’ve long known to be true – that you are only as good as your bullpen.

The Tribe bullpen had a week to forget, going 2-4 with two blown saves on the seven-game trip through Boston and Texas.

Those four losses were all painful, last at-bat defeats, twice in Boston (Jacoby Ellsbury on back-to-back nights) and twice in Texas (Friday night and Sunday night).

The road trip implosion by the pen was pretty much universal. Joe Smith gave up a winning home run in Boston and blew up Josh Tomlin’s excellent start Sunday night; Vinnie Pestano couldn’t hold a tie game against Boston, and Rafael Perez did his part.

But a lot of the focus is on Chris Perez after he gave up a game-tying home run Friday night with the Indians leading 7-5 in the ninth, and barely held on to a two-run lead in the ninth on Saturday night.

According to Indians Prospect Insider, this season “Perez has taken a noticeable step back in all of his numbers. He is still throwing 93-95 MPH, so the velocity is there, but he is getting hit a lot more and not missing bats this season as he is 2-5 with a 3.40 ERA and has a 7.3 H/9, 0.9 HR/9, and 4.3 BB/9, and also has just a 5.9 K/9 and 1.37 K/BB. The biggest concern is the jump in his hit rate where he is allowing almost two more hits every nine innings and the drop in his strikeout rate where he is striking out almost three less batters every nine innings.”

Which leads us back to our question: are closers overrated in baseball?

Certainly the stat of a save is not a reliable indicator of a closer’s value.

But the closer’s role isn’t overrated as much as it’s misunderstood by most fans.

The closer’s job is to get the final three outs (sometimes less) of the game – nothing more. If it’s a one-run game or a three- or four-run game, the job description is still the same.

Go back to Saturday night’s performance by Perez. He quickly got the first two Rangers out, but then gave up two hits and a run before finally sealing the deal.

Was it pretty? No. Did it give Cleveland a collective case of agita? Yes. But the end result was the Tribe won and, really, that’s all that matters.

Bob Wickman used to drive people batty when he closed for the Tribe, but in his own way he got the job done. If he wanted to pitch around a batter – or two – in a one-run game, that was OK as long as he finished the game with the Indians leading.

If a starting pitcher throws six innings and litters the bases with runners, but somehow gets out with only giving up a run or two, he’s praised for “pitching out of a jam.”

But if a closer puts a runner on base it’s the end of the world for some fans.

We’ve learned over the years that when the Indians have a solid bullpen, they generally do well. Bullpen stinks? There goes the season.

This year’s bullpen has been a real strength for the Tribe. Unfortunately the bullpen picked a bad week to have a collective slump.

Now, with the Indians trailing Detroit by four games and the Tigers coming to town for a three-game series, the Tribe needs the pen to bounce back from the mess that was this road trip.

Because if the Indians are going to stay in this pennant race, they are going to need Raffy Perez, Pestano, Smith and especially Chris Perez on their game starting Tuesday night and as long as the team stays in the running for the division title.

And there’s no way to overrate that.