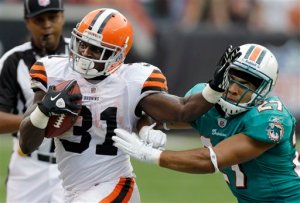 Can the Browns offense show up and actually play for a full 60 minutes?

There’s no added time in American football, so leaving it late like they did last week against the Dolphins is not really a sustainable winning strategy. Especially as Colt McCoy’s quarterback rating is 64.6 in the second half of games, compared to 97.2 in the first half.

McCoy’s biggest strength is supposed to be his accuracy, but he has struggled so far this season to to get into a rhythm with the receivers, and he has completed less than 50 percent of his passes in two of the three games so far.

The Titans have built their No. 1 defensive ranking, second against the pass, with strong performances the past two weeks against Joe Flacco (2 interceptions, 51.2 QB rating) and Kyle Orton (2 interceptions, 67.6 QB rating), so this may be a good week to heavily ride the ground game.

Montario Hardesty put up nice numbers last week with Peyton Hillis out; seeing the two of them healthy and pounding the ball on the ground in the same game is something we want.

On defense, the Browns are catching another break this week, as Tennessee will be without No. 1 receiver Kenny Britt. After Nate Washington (21 receptions on the year), the Titans will trot out Damian Williams (2 receptions), Marc Mariani (3 receptions) and Lavelle Hawkins (5 receptions) as wide receivers.

If the Browns can take away Tennessee’s passing game, they can load the box and focus on continuing Chris Johnson’s poor start to the season.

Johnson is off to a slow start, gaining just 98 yards through three games, a big part of the reason why the Titans rank last in the NFL in rushing offense.

Some (most?) of Johnson’s struggles can be attributed to the Titans’ weak play along the offensive line. Last week against Denver, Johnson ran 13 times and the Broncos were in the backfield on 10 of those. There was just no room for Johnson to get untracked.

Sounds like a perfect opportunity for defensive tackles Ahyta Rubin and Phil Taylor to have a big day.

The 1988 home game vs. the Oilers that sent the Browns into the playoffs.

Don Strock rallied the Browns in the snow from a 23-7 deficit, hitting Webster Slaughter on a post pattern for a 22-yard game-winning touchdown.

The game was also the last win for Marty Schottenheimer as Browns coach. Who know that, 23 years later, the Browns would still be searching for a suitable coaching replacement?

We’ve had a bad feeling about this game all week.

It’s not that we can’t picture the Browns winning, it’s just that we’re struggling with the image of the Browns being 3-1 heading into next week’s bye. Is that possible?

The thought of Chris Johnson running against the Browns 29th-ranked rushing defense also gives us pause.

Of course, the Titans have lost six consecutive road games, with their last road win coming almost a year ago against Jacksonville.

So we’re going to have to go with the Titans and the points this week.

Record picking the Browns (using the point spread) this year: 1-2-0.