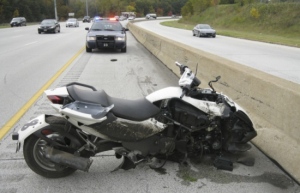 It is unfortunate for Marcus Benard and the Cleveland Browns that Bernard will miss the rest of the season after injuring himself in a motorcycle crash earlier this week.

Benard was placed on the reserve non-football injury list two days after he lost control of his Can-Am Spyder while driving on I-71. According to published reports, Benard cut across three lanes of traffic before crashing into a guardrail in Brooklyn.

Fortunately for Benard he came out of the accident with a broken hand and, possibly, broken ribs. Things could have been far, far worse.

According to the police report, Benard said he was driving at 60 mph when he crashed. Benard was thrown 241 feet – that’s just over 80 yards – in the accident, which got us wondering just how fast a 256-pound man (Benard’s listed playing weight) would have to be traveling to be thrown nearly the length of a football field.

So we posed the question to a physics teacher we know and here is what we found out.

If you rearrange the formula you can solve for the initial speed (so we’re told, we didn’t do so well in high school physics).

However, to calculate Benard’s speed based on the distance he flew off the bike, you need to know the angle of departure, which is a variable we don’t have.

Looking at the chart we can see that there are several angles that correspond (or are at least close enough) to Benard’s stated speed of 60 mph that it is certainly possible he was not speeding when he crashed.

And that ends today’s science lesson.

The Browns also announced on Thursday that they will pay Benard’s full salary for the rest of the season, even though they are not required to by league rules. So good for them on that.