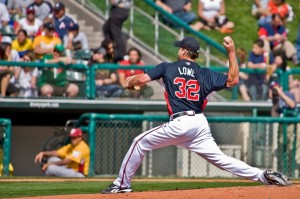 The Cleveland Indians were movers on the first day of baseball’s off-season, declining the option on outfielder Grady Sizemore, picking up the option on pitcher Fausto Carmona and trading for starting pitcher Derek Lowe.

The Indians traded for the 38-year-old Lowe, who was 9-17 with a 5.17 ERA for the Atlanta Braves last year. The Braves were so frantic to get rid of Lowe that they will pay $10 million of his $15 million salary for next year.

And those 17 losses? They were the most by a starting pitcher in the big leagues this season.

We just can’t join the crowd in trying to talk ourselves into Lowe as a viable starting pitcher any more. If he couldn’t do any better in the weaker NL, what is he going to do taking the mound against the Tigers, Yankees, Rangers and Red Sox?

We understand the reality of the economic situation for the Indians, however. They don’t have the money needed to be active participants in free agency so this is the only kind of move they can make. And that is probably what gets on our tits more than the thought of Lowe taking the mound every five days for the Tribe.

We just finished a post-season where the Texas Rangers and St. Louis Cardinals were praised for taking on the “big-money teams” in baseball. Of course, the Cardinals had an Opening Day payroll of $105 million and the Rangers were at $92 million; both far more than the Indians $48 million.

And let’s not forget the Rangers have an $80 million per year TV contract in place to start in 2015; the Tribe ain’t getting that kind of money.

Consider that the Yankees will pay C.C. Sabathia $24 million next year – about the same, or slightly more, than the Indians will pay for their entire starting rotation.

So, wahoo to a starting rotation of Justin Masterson, Ubaldo Jimenez, Carmona, Josh Tomlin and Lowe.

As for Sizemore, there was no way the Indians could bring him back at $9 million a year, no matter how much money they had. Not after he played in only 210 games over the past three seasons.

Of course, if the Indians pony up the cash then Sizemore will be back in Cleveland next year.

“Grady is not going to rule out playing for anyone, including the Indians,” said Joe Urbon, Sizemore’s agent. “The only difference is now he is able to engage with all 30 teams.”

In other words, Sizemore will sign with the team that gives him the most money. And there is already speculation that Sizemore will be the “right fit” for the Red Sox.

Something tells us we’ve seen the last of Sizemore in Wahoo Red, White & Blue.