Perception, reality and the Browns 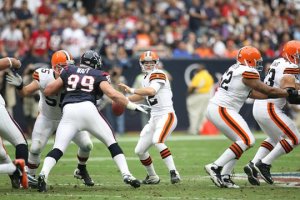 With the St. Louis Rams coming to town on Sunday to take on the Browns, we got to thinking about how people perceive the current Browns season and head coach Pat Shurmur.

Shurmur spent the past two seasons as offensive coordinator of the Rams and, after just eight games in charge of the Browns, some are ready to run him out of town.

If Shurmur is so incompetent, you’d think that Rams fans would be glad that he no longer is in town. But that appears not to be the case, according to Jim Thomas, who covers the Rams for the St. Louis Post-Dispatch.

“I think if you would have taken a poll to see if Shurmur should be rehired, maybe the vast majority of the fans would have said the Rams probably should fire him,” Thomas told the Beacon Journal. “Then he ended up as head coach of the Browns. So that was the image and part of it was because of a lot of short passes and an offense that didn’t score a lot of points. But when you consider that he had a rookie quarterback (Sam Bradford), a rookie left tackle (Rodger Saffold), a right tackle in Jason Smith who’s basically a rookie and next to no wide receivers to work with, he did a pretty good job in St. Louis.

“They had averaged only 10.9 points a game (in 2009), and they scored a touchdown more a game (in Shurmur’s second season as offensive coordinator). … One of the biggest criticisms from not just fans but some media and columnists was that they needed to take more downfield shots. But the West Coast offense is more of a timing thing, the Rams really didn’t have deep threats at receiver and I think he did it partly to protect Bradford.

“He did a good job in developing Bradford, and I think he got a lot out of the offense.”

Hmm, a young quarterback still learning the league, inexperience offensive linemen, no wide receivers to work with … where have we seen that? (And don’t forget the fourth- and fifth-string running backs).

But that reality clashes with the perceptions among some fans. The way they see it, Shurmur should have been able to turn this team into the ’87 Browns while installing a completely new offensive system without the benefit of a full off-season. That hasn’t happened so they need to create an alternate reality filled with doom and gloom.

Perceptions can work both ways, of course. The Browns have the “No. 1 pass defense” in the NFL, if you go by yards allowed. But is that because they have a defense that terrorizes opposing quarterbacks? Or is it more likely that it is so easy to run on the Browns that opposing teams have no reason to pass the ball?

This isn’t unique to Cleveland; take the case of the Carolina Panthers, who are ranked No. 5 in the league in offense.

Because they have been able to move the ball on offense, the Panthers are treated as a “team to watch.” But that masks the reality that they are 2-6 and all those yards are not translating to wins.

If it turns out the Panthers are for real, however, maybe the Browns can hire a dynamic offensive coordinator like Carolina’s Rob Chudzinski. Oh wait, they did that and, in the great Phil Savage/Romeo Crennel purge of 2008, Chudzinski had to go so we could get offensive mastermind Brian Daboll here.

The Browns are clearly not showing the kind of offensive progress we had hoped to see eight games into the season, but we can still hold out hope that a better day is coming.

Now whether than hope is just us creating our own reality or not, only time will tell.

Finally, now that word has come out that Joe Paterno will “retire” at the end of the season* – much like how Jim Tressel “resigned” earlier this year – this gives everyone another good lesson in how to judge someone’s character.

People don’t have good character just because they wear a sweater vest or thick glasses, or because they talk a good game – a person’s character is revealed by the choices they make.

We recently had the opportunity to hear Lt. Gen. (Ret.) Daniel Christman, former superintendent at West Point, talk about the meaning of honor.

“‘Honor’ and ‘integrity’ are closely associated, but they are not synonyms,” Christman said. “Integrity means living a principled life, always free from hypocrisy, being true to your values. Honor defines what those values and principles are. Simply put, it means ‘doing the right thing.’”

Judging from the way Paterno and Tressel acted – looking out for No. 1 above all else – they would have learned a valuable lesson from Christman’s talk.

Posted in Cleveland Browns, over reaction, perceptions, right vs. wrong