Next time, just call a timeout 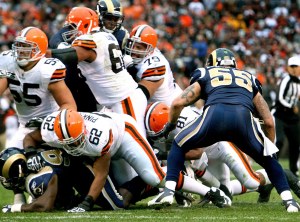 While we’re obviously not happy with the outcome of the Browns game on Sunday against St. Louis, we still understand – for the most part – Pat Shurmur’s decision to play for the go-ahead field goal in Sunday’s loss to the Rams.

What gets on our tits, however, is everything surrounding the handoff to Alex Smith on 2nd-and-goal from the 9.

On Monday, during his weekly press conference, Shurmur said he knew what was going on.

“In the course of the game, I was calling a play based on the fact that it was a fullback play and Owen not being in there happened in that time frame,” Shurmur said. “We were handing the ball to the fullback. Alex knew he was getting the ball, Colt (McCoy) knew he was giving it to him and they’re football players. Had I known now, I would have tried to call a timeout, but the clock was already off on the communicator to Colt and they were ready to play. So that’s what happened.”

We understand things can get a little crazy on the sidelines and things can get mixed up. Players are shuffling in and out, the coaches are thinking a couple of plays ahead. But should the coach be so wedded to the play sheet that he doesn’t let the personnel on the field dictate the play?

And when the play comes in and it is a handoff to someone who has never taken a handoff at any level of organized football, shouldn’t McCoy just take the initiative and call timeout?

“No, because Alex knew he was getting the ball,” Shurmur said. “They did it all right except for the exchange.”

Well sure, everything was great until it wasn’t. But if something doesn’t look right, especially at that late stage of the game, then McCoy needs to call a timeout, and if the coach’s ego can’t take it, that’s too bad.

Plus, didn’t we cover all this in Week 1 when the Bengals snapped the ball while the Browns were still in the huddle?

Next time, and this being the Browns there is always a next time, just call the timeout, OK?

According to ESPN Stats & Information, Rams running back Steven Jackson rushed for a game-high 128 yards Sunday including 104 yards between the tackles. It is the most yards Jackson has rushed for up the middle in a single game since Week 4 of 2008 (105).

According to Pro Football Focus, Browns left guard Jason Pinkston had a decent game against the Rams. The website notes that:

It’s rare a team has so few “bad” performances and loses. No one on the Cleveland team did much wrong but neither did many truly excel. Worthy of some note though was rookie Jason Pinkston’s first positively-graded game of the year (+3.0). Prior to this he’d been doing his best to accomplish the impossible; provide a downgrade on the criminally-overrated Eric Steinbach at LG. However, despite his best efforts, even he managed to get some movement against the two ends who come inside in nickel. Both C.J. Ah You and James Hall usually play on the outside of the line in base but come inside to rush the passer in nickel. When the Browns decided to run against this Pinkston had consistent success against them. His pass-blocking, which on the season has been a little below average, continued that trend as he gave up a hit and a sack to Hall but nothing else in 35 pass blocks.

Not sure we agree with that, but if Pinkston is making progress that will make McCoy’s life a little bit easier.