The "education" of Colt McCoy 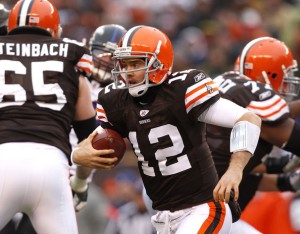 Another day, another reason to be thankful that the Browns are no longer saddled with offensive coordinator Brian Daboll and his brand of “motivation.”

For reasons we don’t totally understand, Michael Silver at Yahoo! Sports decided to revisit the story about how Daboll treated Browns quarterback Colt McCoy during his rookie season. And even though it seems odd to bring this up again – it made sense the week before the Miami game – that doesn’t make it any less disturbing.

According to Silver, Daboll had a special plan for McCoy:

Now we’re getting somewhere. With team president Mike Holmgren and general manager Tom Heckert calling the shots, the power base of coach Eric Mangini and Daboll had dwindled. Unable to talk back to the bosses, Daboll decided to pick on the Holmgren-selected rookie quarterback instead.

Because that’s what bullies do, and there’s no way to classify Daboll as anything other than a bully.

“The simple reason (people bully) is it shows that they have power over others,” according to Marlene Snyder, Development Director for the Olweus Bullying Prevention Program in the United States, based in Clemson, S.C. “The reason that they do it repeatedly is that they are getting away with it. Nobody is calling them on their bad behavior (nice leadership from Mangini, there). When they aren’t called on it they think, ‘Well, it must be O.K.’

“A person who bullies intentionally picks out someone that they know is weaker than themselves so that they can intimidate, harass or humiliate them to do their bidding. It is a misuse of their power. This behavior is usually repeated and of course this power differential is there.”

The fact that McCoy was the All-American quarterback from a major college football power, while Daboll was one of the worst offensive coordinators in the NFL, probably played a role as well.

As to where Daboll got his sense of entitlement from, who knows? He, of course, would not talk to Silver for the article.

To his credit, and showing the kind of mental toughness you want in a starting quarterback, McCoy took the high road when Mangini and Daboll were shown the door after a second consecutive 5-11 season.

“When those guys left I walked up and shook their hands,” McCoy told Silver. “I really did appreciate them. It made me stronger as a man. It taught me a lot about how to handle things.”

McCoy may not be the answer at quarterback for the Browns, but he definitely proved he is the better man in this situation.

“There was a lot of pressure put on Colt, and some of it was over the top,” said tight end Evan Moore. “He was coming off winning 45 of 53 games in college, and it was the first time he was dealing with adversity. It was a whirlwind for him. He stepped right into a buzz saw. It rocked his world. I knew it was tough for him, and there were a lot of times when he was frustrated. But he did a good job of not really showing it, and he handled it well.”

One thing we probably need to do is stop reading these kinds of stories. We are so tired of talking about last year and what was, to some, the brief Camelot of the 10-22 Mangini era.

Those days are gone and, thankfully, they are not coming back.

3 thoughts on “The "education" of Colt McCoy”