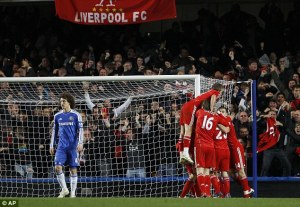 It’s not the Premier League title of the Champions League, but Liverpool moved one step closer to adding another piece of silverware to the trophy case with a 2-0 win over Chelsea in the Carling Cup.

Liverpool now moves on to the semi-finals, where they were drawn with Manchester City on Wednesday.

Conveniently, the draw placed Championship squads Crystal Palace and Cardiff in the other semi-final, guaranteeing an underdog story for the Feb. 26 final at Wembley.

“There is still a semi-final to play over two legs and there are some massive sides in there, so it is going to be very tough,” longtime Liverpool defender Jamie Carragher told The Daily Mail. “We’ll take the semi-final very seriously. I’ve played at Wembley once or twice for England, but I’ve never done it for Liverpool.”

Liverpool will continue its quest for its eighth Carling Cup – the most ever – when the home and away ties are set for Jan. 9 and Jan. 23.

It’s not all good news, however, as Liverpool officials are awaiting the results of a scan on Lucas Leiva’s knee, with the club fearing the talented midfielder could be out for the rest of the season.

The Brazilian international was taken off the pitch on a stretcher just minutes before the end of the match against Chelsea, following a collision with Ryan Bertrand.

Lucas, who remains on crutches, fears he has suffered serious damage to the knee and that he faces a lengthy spell on the sidelines, according to The Guardian. His season could be over if the scan confirms a ruptured cruciate ligament and a six-month recovery period.

Finally, after yesterday’s note about how the the Browns are 7-31 since 2005 against the AFC North, we went back to see how they’ve done within the division since 1999.

Butch Davis was the most successful, going 12-16 in his 3+ years in charge. After that, it gets pretty ugly:

So the bar’s been set pretty low for Pat Shurmur; let’s hope he doesn’t stub his toe trying to clear it.