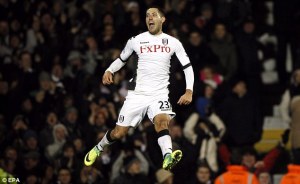 Congratulations to Clint Dempsey, who on Monday became the highest-scoring American in the Premier League.

Dempsey’s goal at the 85-minute mark gave him 37 goals since joining Fulham in 2006, breaking a tie with former teammate Brian McBride, who played with Everton in 2003 and Fulham from 2004 to 2008.

We’re even willing to overlook that Dempsey’s goal came in a win against Liverpool.

And speaking of the Reds, it’s never a good sign when your £35 million investment’s performance is labeled as being “lumbering.”

One thought on “Clint Dempsey’s the man”