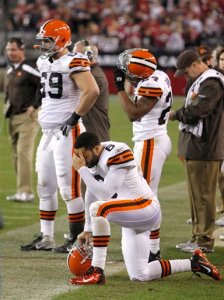 Even though the Cleveland Browns walked out of Arizona with an overtime loss to the Cardinals, they still learned three important lessons on the way to falling to 4-10 on the season.

1. If you are trying to punt the ball out of bounds, make sure you get it done.

Brad Maynard’s punt in overtime stayed in bounds, that gave an opening to Arizona’s Patrick Peterson to return the kick 32 yards and set the Cardinals up for the game-winning score.

“Believe it or not, I was trying to kick it out,” Maynard told The Plain Dealer. It’s hard, easier said than done. You just can’t let him touch the ball in that situation.”

You play for the Browns, Brad, trust us we believe it.

2. It’s probably a good idea to cover Larry Fitzgerald in a big spot.

“He’s supposed to make catches, but when we were on him, when we were covering him, we were doing our thing,” Joe Haden said after the game. “He didn’t catch any passes over anybody. We feel that if we played that technique better, we would’ve done the same thing we’d been doing the whole game. It always happens. We’ve just got to find a way to get that fixed.”

3. The Browns learned that Seneca Wallace is a capable back-up quarterback, one who won’t embarrass the team (think Spergon Wynn), but there’s a reason why he is 6-13 in his career as a starter.

Wallace got the start in place of the injured McCoy, and while he was efficient early on, nothing went right for the Browns once they took a 17-7 lead with 3:21 left in the third quarter.

From that point on, the Browns had five drives – four ended in punts, the fifth ended with a Wallace fumble on the second of consecutive sacks – as the team faded down the stretch.

During that stretch the Browns gained 52 total yards of offense as Wallace was 5-of-11 for 47 yards. And for the game the Browns were just 5-of-14 on third down.

“We had them on their heels and when it gets to that point, it is about not making mistakes,” Wallace said in published reports, “not turning the ball over and giving them some easy points, and making plays. They played well on defense and made some plays. I need to help us out a lot more and make some more plays for our team.”

So at least the Browns got something out of the trip.

“It’s important that you stay on the field and execute on third down; that keeps drives alive,” Browns coach Pat Shurmur said. “It’s really good when you’re getting first downs on second down. We need to continue to do the things we did on the first drive and I think the third drive. We’ve just got to do what we have to do as a team. It was a team thing to get ahead — offense, defense and the kicking game — and it was a team thing to fall behind. That’s the deal, so we’ve got to find a way to finish games.”