Someone should check Hollins’ gymbag 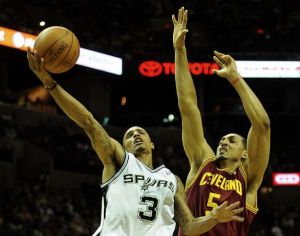 The Cleveland Cavaliers will be short a player for tonight’s game in Toronto after Samardo Samuels was unable to make the trip because he lost his passport.

With Samuels unavailable, Ryan Hollins will fill the backup role at center. If he gets in the game, it will be the first action Hollins has seen since opening night.

Did anyone with the Cavs think to check Hollins’ locker for the missing passport?

According to the site:

With a chance to play in the final three games of the season, Seneca Wallace wanted to prove himself worthy of a starting quarterback position. However, he didn’t get the job done as the Browns lost those three games by a combined 13 points. Perhaps if Wallace played one level better than Colt McCoy, the Browns win a few games and Wallace gets a chance to further prove himself in 2012.

Overall, Wallace finished with a 65.87 QBR, while Colt McCoy finished with a 75.16 QBR. Clearly, neither quarterback worked in this limited offense, and McCoy should be the leading candidate to return as the starter in 2012.

Not sure we like either option, but Wallace definitely didn’t do himself any favors over the last three games of the season.

Everton’s Tim Howard became the fourth goalie – and second American – in Premier League history to score a goal in Tuesday’s game against Bolton.

But just like when Brad Friedel scored, Everton ended up losing.

Finally, Jonah Keri at Grantland is not a believer in the Window in baseball – the short period of time in which small-revenue clubs supposedly have to compete.

Keri writes that: There is a nugget of truth behind this Window obsession. Smaller-revenue teams have a tougher time signing premium free agents, or retaining their own top players past their initial six years of team control. That puts extra pressure on these poorer teams to bring up a bunch of great prospects all at once, then hope they get good at the same time before they get expensive.
But far more often it’s a … excuse. It’s a vague, faraway goal that always seems several years out of reach. It’s a cover for cheap, greedy ownership, lousy scouting, drafting, and player development, and myopic trades. It’s a weak attempt to placate a fan base screwed over by years of management incompetence and indifference.

We think the Dolans would like to have a word with Keri.

Finally, today is the 31th anniversary of the Browns playoff loss to Oakland in the Red Right 88 game.

That was the day we learned what it meant to be a Browns (and Cleveland) fan. We were obviously much younger then and that was the first Browns team we fell in love with.

If only Brian Sipe had thrown the ball to Dave Logan this site would exist under a different name and would possibly have a different tone to it. But that’s not the way it worked out.

If you’re in the mood, video of the final drive is here. If you want to relive that magical season, Jonathan Knight’s book, Kardiac Kids: The Story of the 1980 Cleveland Browns, is an excellent read.