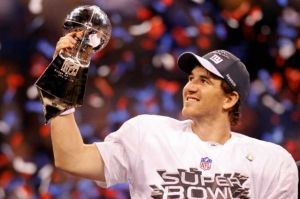 The New York Giants win over New England in Super Bowl XLVI confirmed a couple of truths about life in the National Football League.

A team’s regular-season record no longer matters; all that is important is getting into the playoffs and getting the right match-ups once you are there.

At 9-7, the Giants were clearly not the best team in the league during the regular season. But they made the playoffs in part because Dallas fell apart down the stretch and, once there, the Giants made the most of their opportunities.

It helped that New York played a flawed team in Atlanta, a flat Green Bay squad and an over-rated San Francisco team. They also matched up very well with New England.

They still had to play the games, of course, so we’re not taking away anything from the Giants. But it makes us wonder what might have been if the Browns had been able to get into the playoffs in 2007.

Even though Derek Anderson spent the second half of that season falling apart, if he could have gotten hot for a game or two, who knows what would have happened?

Secondly, New York coach Tom Coughlin is something else. Giants fans were ready to run him out of town when the team was 7-7 following their second loss of the season against Washington.

But he showed everyone the reward of having patience. Hopefully Browns fans were paying attention.

A few other thoughts as we close the books on another NFL season:

With their Super Bowl win, the Giants move into a tie with the Browns for the third most championships in professional football with eight. The Packers lead with 13, followed by the Bears with nine titles. Wonder what the odds are on the Browns being the team that breaks the tie with New York?

New England coach Bill Belichick hasn’t won a Super Bowl since Romeo Crennel left his staff following the 2004 season and the Patriots are just 7-6 in the playoffs in that span. Crennel is the only former Belichick staff member to not be infected by the “my way or the highway” brand of arrogant coaching employed by every other member of the Belichick coaching tree. Is it a coincidence that the Patriots haven’t won anything without Romeo balancing things out on the sidelines?

How is it that in their two Super Bowl wins over the Patriots, the Giants were able to drive 83 yards and then 88 yards for the game-winning touchdowns against a defensive “mastermind” like Belichick?

As the Super Bowl champions, we know the Giants will kick off the 2012 NFL season at home on Sept. 6. In addition to their divisional games, the home opponents on the Giants’ schedule are Green Bay, New Orleans, Pittsburgh, Tampa Bay and … Cleveland. The NFL wouldn’t make the Browns a sacrificial lamb for that game, would they?

Sounds like Gisele Bundchen and Brad McCoy should have lunch together sometime during the off season. Bundchen stood by her man, Tom Brady, after the game, blaming the Patriots’ receivers for the loss.

Until then, remember the wise words of Marvin Gaye: Believe half of what you see, son, and none of what you hear.