The Wait is Over (well not The Wait) 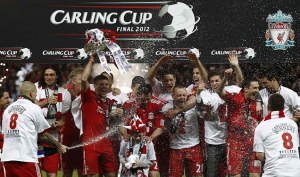 Liverpool ended its six-year run without a trophy by winning the Carling Cup on Sunday, beating Cardiff on penalty kicks.

It was the record-setting eighth time the Reds have lifted the trophy, and the franchise’s 15th domestic cup win, putting them in a tie with Manchester United for the most.

The match had the feeling of a March Madness No. 3 vs. No. 14 game, with the Bluebirds, currently in sixth place in the Championship League and looking to bring a trophy to Wales for the first time since 1927, going up 1-0 just 19 minutes into the game on a Joe Mason goal.

The game finished 1-1 in regulation time, and Liverpool’s Dirk Kuyt, the hardest-working man in soccer, looked like he had sealed the win with a goal at the 108-minute mark.

But Cardiff fought back and Ben Turner put in a goal just two minutes before then end of extra time to force the cup final to penalty kicks.

“It was incredible, an incredible day,” Kuyt told The Daily Mail. “I’m so happy to have scored the goal. The most important thing was we kept believing and, in the end, I think we deserved the trophy.”

“It’s a long way to win it, but out name’s on the trophy and that’s all that matters,” Liverpool manager Kenny Dalglish said on BBC1. “Cardiff were always going to be difficult, but at the end of the day we’ve got our name on the trophy.”

No matter the outcome – and did we mention this was Liverpool’s eighth time winning the cup? – this was an entertaining game. We can’t imagine how anyone could have watched the match and walked away saying soccer is boring.

Another day, another injury for the Indians.

Sunday, it was Chris Perez, who strained his left oblique and probably will be sidelined from four to six weeks.

That came on the heels of the announcement that Grady Sizemore has a bad back and the Indians center fielder will miss the start of the 2012 season.

And the sun rises in the east and sets in the west. What else is new?

Seriously, though, this can’t come as a surprise to anyone associated with the team, from the front office, to manager Manny Acta down to the fans. Sizemore hasn’t played a full season since 2008 and has averaged just 70 games over the past three seasons.

Realistically, if everything broke right (sorry, probably a poor choice of words when talking about some as chronically injured as Sizemore), we could have only hoped for about 100 games out of Sizemore this season.

So the question becomes, for fans, which 60 games would you rather have Sizemore miss?

Being out for the start of the season seems preferable to missing games in September, or during 15-game divisional stretches in late May and late July that each feature six games against Detroit.

The one bright side is spring training just started, so the Indians have time to figure out how to fill Sizemore’s place in the lineup before the opener on April 5 against Toronto.

Things are not looking so great for the Kent State men’s basketball team right now, especially after losing by 16 points on Saturday at Bowling Green.

The Golden Flashes were winless on the road in the MAC’s East Division this year, a feat that seems unbelievable for a team with Kent’s pedigree coming into the season.

The loss was the third in a row for the Golden Flashes, dropping them out of a tie for second place in the division and putting them in danger of not getting a bye in the upcoming conference tournament.

“Everyone wants to win, Miami wanted to win, Bowling Green wanted to win too,” coach Rob Senderoff said after the game. “Who ever you play wants to win. The problem is more than that. Do our guys want to win? Yeah they absolutely want to win. Are they doing the things that are need to win? Obviously not, that is one of the reasons we’ve lost three in a row.”

The team has two games left to get things turned around, at home Wednesday against Ohio and the regular-season finale Friday against Akron.

But with the way they’ve played the past week, it’s hard to see the team doing much this year come tournament time.

Now that Ohio State offensive tackle Mike Adams had such a weak performance at the combine, running a 5.31 40-yard dash and benching 225 pounds just 19 times, the fanboys will hopefully stop calling for the Browns to waste a draft pick on him.

Too many Browns fans still cling to the notion that just because someone played at Ohio State that means the Browns should draft them.

In Adams case, let some other team waste a pick; the Browns have too many holes to fill without creating other ones by wasting draft picks.