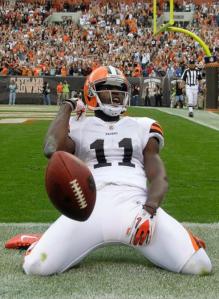 The NFL released the 2012 schedule on Tuesday (in case you hadn’t heard) and, as always, the Browns have some interesting match-ups ahead of them this fall.

Oddly enough, after making a big deal last year about back loading the schedule with division games, the Browns only have two division contests after the bye week – both against the Steelers.

The Browns will face teams that had a combined 135-121 record (.527) last season, giving them the third-toughest schedule in the league and the hardest for a non-playoff team.

“Although we have known our opponents and where we are going to play since the end of last season, there is always a certain amount of anticipation as to how everything will fall into place,” Browns coach Pat Shurmur said in a release. “I think that opening the year at home against the Eagles will be great for our players and our fans. It will be exciting to play a team, an organization and a coach for whom I have a tremendous amount of respect. It will be a good test for our team. Ending the year in two of the tougher venues in the NFL also will present a challenge. I am looking forward to kicking off the 2012 season.”

Which just makes next week’s NFL Draft that much more important.
(Photo by Cleveland Browns.com)