Browns cowboy up with Weeden 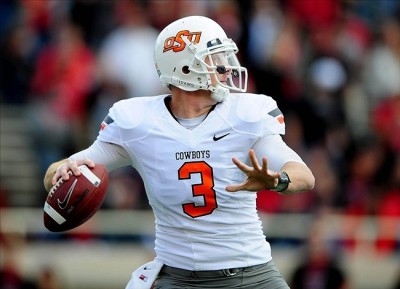 “He was a winner,” coach Pat Shurmur said on the team’s website. “He obviously took a non-traditional path to being an NFL quarterback, but he’s a very mature guy. I think he’s an outstanding thrower. He’s a good decision-maker, very accurate. He found a way at Oklahoma State to really compete and win a lot of football games against a lot of the quarterbacks we’ve been talking about leading up to the draft. I wasn’t concerned about his age. He is a quarterback that helped lead his team to a lot of victories.”

Weeden earned the Oklahoma State starting job in 2010 and broke 15 school records. During his four-year career in Stillwater, Weeden threw for 9,260 yards and 75 touchdowns.

“As you know, maturity, leadership, how you go about business in a locker room, I think that goes a long way — especially playing this position,” Weeden told Kurt Warner on the NFL Network. “I use you as an example all the time. You had a tremendous career, won a lot of games starting at 28, all the way through your 30s and had a fantastic career. I’m not comparing myself to you — I hope to be mentioned in the same sentence as you — but longevity-wise, I think I’ve got a lot of football left in my tank. If I can play for eight, 10, 12 years, that’s a heck of an NFL career and something I would take a lot of pride in.”

We’ve heard the grumblings that Weeden is too old and that the Browns could have waited and picked him with their second-round pick. But if the team truly believes he is the guy, why risk it? Especially with all the trade activity going on in the first round.

According to NFL.com, “Weeden has an NFL-quality frame that allows him to look over the offensive line and deliver his throws without a hitch. His quick release is his strongest asset, as he consistently fires the ball with a compact throwing motion and strong delivery. The ball zips off his arm, and he has the ability to fit it in any tight space. He is ‘all of the above’ in terms of being a mature, poised leader. He is an accurate passer on throws short and long, and he has that gunslinger mentality to go for the deep ball when it’s an option. He understands route progressions and throwing the ball to allow his receiver to make a play.”

We’re going to wait until after tonight’s second and third round before really going into how the Browns did in the draft, but after selecting Alabama running back Trent Richardson and Weeden, there’s no doubt the Browns are a better team today than they were yesterday.

And when was the last time Browns fans could say that?