The Big Show, England and other random stuff 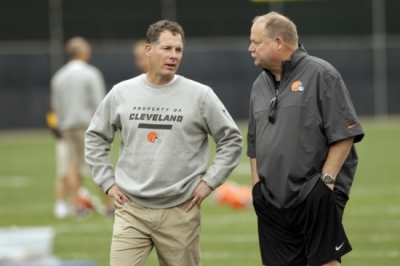 Browns team president Mike Holmgren spoke to the media on the eve of the Browns final team event before the start of training camp and surprisingly had a few things to day.

First, he’s going to try and get out in front of the press a bit more this year. As much as he tried to let general manager Tom Heckert and coach Pat Shurmur handle things, he’s decided to throw the Cleveland media a bone once in a while.

“Now, exactly how that is going to manifest itself, I couldn’t really give you the blueprint for that yet,” Holmgren said during the press conference. “But, I’ve talked to both Pat (Shurmur) and Tom (Heckert) about this idea and they have to know and your coach has to know that the president is on your side.

“It’s going to be a little bit of a change, but we all have to understand this, this is really important, that Pay Shurmur is the coach of this football team, he will make football decisions. Tom Heckert and Pat and I talk about every football decision, but the head coach has to have that responsibility otherwise it doesn’t work very well, in my opinion. That’s how it’s going to be set up.”

That should quiet the hoople heads who constantly whined that Holmgren “only talks to people in Seattle,” At least until the first time Holmgren talks to the Cleveland media and doesn’t really say anything.

“The Seattle radio controversy was one of the more amazing things I’ve been involved with in my whole life as a football coach or exec or whatever you want to call me right now,” Holmgren said. “That was just a friend of mine that used to work on the radio station. I had no idea it would cause the ripple effect it apparently did. Other than that, if they feel that way, then that’s probably a good reason for me to be out there a little bit more and let them get to know me a little bit, if they feel that way.”

Holmgren did issue one warning to the media.

“I’m not sure I’m doing the right thing this time to be honest, but I feel like as long as you don’t involve me in a big controversy with my coach, then that’s how I’d like to do it,” he said. “I don’t want you to ask Pat a question the day before I talk to you then, ‘Oh, gotcha.’”

Holmgren didn’t direct that question to anyone in particular but we have a few guesses as to who he meant.

The team is happy with No. 1 draft pick Brandon Weeden (big shock) and have no plans right now to trade either Seneca Wallace or Colt McCoy.

“There is a maturity level because of (Weeden’s) age, he is a different rookie because of that,” Holmgren said. “I think lastly, if you pick a player in the first round, you are saying something. You’re telling everybody something. Now having said that, nothing gets handed to anybody and that’s essentially what I told him, but if he’s the player we think he is and can be, I think he has the chance to have a fine career in this league, but he’s going to have to show us now. We believe that that can happen, but he has to come in and play.

“Right now the plan is not to (make a move with Wallace or McCoy). I think that position, heck the first two years we’ve had to go to the third quarterback because of injury, so that’s not to say we might change something, but right now, no.”

That makes sense and we don’t get the urgency from some people that the Browns have to do something right now. There’s no reason they can’t keep all three if they want to, just as there is no reason to make a move now, three months before the season begins and having no idea how training camp will play out or what needs other teams may have.

The biggest takeaway, however, was the decision to bring back the Brown jerseys at home next season.

“The all-white is a historical thing and people like that, but then they missed the brown jerseys,” Holmgren said. “Our owner has a say in this too. What we are doing is at home, where you can make your choice, we are going to have brown and white. The main factor behind that is weather. That was probably the main consideration so at home games we are probably going to split it.”

Nice bounce back game from England today at Euro 2012, as the Three Lions pulled off a 3-2 win over Sweden and stay alive in group play.

England fell behind 2-1 in the second half before Theo Walcott tied the game. Danny Welbeck then got the clincher in the 78th minute.

England now only needs a draw from their final group fixture match against Ukraine to reach the quarterfinals. And they are getting Wayne Rooney back now that his two match suspension is over.

With only one game remaining in group play, teams now know what they must do to advance.

Here’s a really good read from Grantland on the strange life of the English national team.

Finally, we caught the NBA TV special on the original Dream Team that rolled through the 1992 Olympics in Barcelona.

It was good, nothing ground breaking, but good.