Spain is unquestionably the best 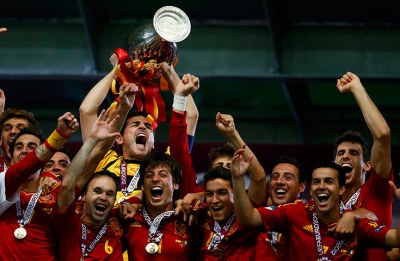 Spain beat Italy on Sunday, 4-0, in the Euro 2012 final and lay claim to being one of the greatest international teams in history.

The win was the squad’s third consecutive international title, with championships in Euro 2008 and 2012 sandwiching a World Cup title in 2008 (the first time a European team has pulled that off), leaving little doubt that Spain is currently the best team in the world.

“We had a great level of play this evening and we were faithful to our style throughout,” Andrés Iniesta told The Guardian. “Of course, it would have been different had Italy not been playing with 10 by the end, because that made things easier for us. But we have to enjoy this victory. Everybody has their own point of view and we are not here saying our game is the most beautiful of them all. But this achievement is unique. It’s magical. Something that cannot be repeated. We still haven’t really realised how great this is. Spanish football is living great years. We are very complete as a football side and we have to be proud of that.”

Spain had been criticized prior to the final for not being at the top of their game in the tournament, doing just enough at times to pull out a win and advance. That all changed on Sunday.

“Those people who think we are playing boring, in my opinion, don’t understand the game,” Cesc Fábregas said “This feels really amazing. One of the best days of my life. I don’t think we’re ready to see what we have done yet – three major trophies in a row has never been done before in football. It’s difficult to understand but, in time, I think we will understand. It is amazing.”

ESPN adds another contender: the squad that Brazil fielded starting with the 1994 World Cup and stretching to the 2007 Copa America. During that time, Brazil won two World Cups and four Copa America titles while also losing the final of the 1998 World Cup and the 1995 Copa America.

But Brazil never won three tournaments in a row.

Spain hasn’t allowed a goal in more than 500 minutes of play, and Sunday’s shutout was its sixth consecutive clean sheet in Euro matches.

Overall, in their last 49 competitive matches, Spain is 41-3-4 (one of those losses was against the U.S. in the Confederations Cup prior to the last World Cup) and has outscored its opponents 107-25.

While it can be debated where this Spain squad falls on the list of all-time greats, it would be impossible for anyone to make the argument that they are not the best in the world right now.

And can they make it four in a row at the 2014 World Cup in Brazil?

“This success for Spanish football is something historic but now we have to look to the future,” manager Vicente del Bosque said. “There will be more challenges ahead, including qualifying for Brazil and the Confederations Cup next summer, where we’ll represent Europe. But we must go on. This is a great era for Spanish football and we are talking about a great generation of footballers. They come from a country where they learn how to play – we have done a great job with football in Spain – and this was reward for them. I spoke with the King and his son and they were very excited. This was an extraordinary night.”

To out on a high note, check out these video montages of the tournament from the BBC and ESPN (the BBC’s is better, by the way.) (h/t EPL Talk)