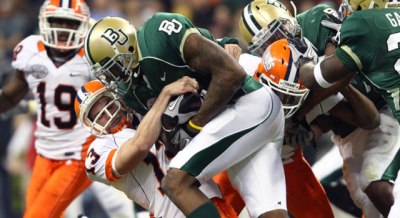 Two days after the Cleveland Browns selected former Baylor wide receiver Josh Gordon in the NFL Supplemental Draft, opinions are all over the board about the move.

They range from the positive, like ESPN’s John Clayton:

Using a second-round supplemental pick … might have been a gamble for the Cleveland Browns, but it was a smart gamble.

When Mike Holmgren took over the Browns, the cupboard was bare at wide receiver. Even though former coach Eric Mangini used 2009 second-round picks on wide receivers Brian Robiskie and Mohamed Massaquoi, neither offered the play-making ability to match the previous offenses …

Getting Gordon — even at the cost of a second-round pick — was worth it. It might take Gordon until 2014 to be a legitimate starter. Little or Gordon might never be as good as Jones, but if Heckert is right on Gordon, the Browns have more potential playmakers at receiver to start climbing out of the bottom of the AFC North in the next few years.

To those that are a little more moderate, like NFL.com’s Albert Breer:

Still, questions remain: Was this a jumping-off point for a 10-year career as an NFL playmaker for Gordon? Or was it simply a guy straightening up when he had to, with millions of dollars on the line? Put another way, has Gordon really grown up, or was all this just a matter of how he showed up to evaluators?

Take the background stuff out of it, let’s talk about the player and his talent. He plays at just under 6-4 and at 220, that’s hard to find, and does play with legit speed,” an AFC college scout said. “I know he ran 4.52, but he plays like a 4.40 guy. … The issue is those Baylor guys are tough, there’s no playbook, there’s a lot of route conversions. He’s gonna be starting over from a fundamental standpoint. He doesn’t know how to run routes, and he has some natural tightness.

I think all that stuff is fixable,” the NFC personnel director said. “Some things he does better than (Justin) Blackmon. He plays faster than Blackmon, has a similar body type. He has better body control and is a more fluid athlete. The difference is, Blackmon’s finished product. Think of it this way, say you get 20 reps running a specific route at game speed, and add it up. Think of many reps he missed. That’s how far behind he is. And then you have to think of how far he can go.

There are those who tried to take a realistic look at what the Browns are getting, like The Rookie Scouting Portfolio (h/t @RyInCBus):

In theory, Gordon is an excellent choice for the Browns, which drafted University of South Florida receiver Carlton Mitchell a few years ago, but haven’t seen a positive return on its investment. Mitchell and Gordon have a similiar physical skill set: big, strong, and fast. Paired with a strong-armed quarterback that is capable of down field accuracy, a receiver with this type of athleticism should become a greater asset than he was as a target to Colt McCoy.

While some asked legitimate questions about how productive Big 12 receivers can be on the NFL level (h/t Cleveland Frowns):

Michael Crabtree and Dez Bryant had a few things in common. Their Texas ties, the ties to Deion Sanders/Eugene Parker in the build-up to the draft, and the fact that they were the best the Big 12 South had to offer during a prolific passing era. Then, to see that they both had trouble initially exploding with success at the NFL level made some of us wonder about the way the ball is passed in the Big 12, and whether it is truly a great way to prepare for the NFL game. Was there enough “press coverage” in the conference, or were there simply “free releases” for every route? The free releases would not prepare these players for the next level, and when NFL corners would press them at the line, something teams do to Bryant and Crabtree regularly, would that cause their abilities to be somewhat mitigated?

Going to the other extreme we find this pile of nonsense from Clark Judge at CBS Sports:

I didn’t realize how much the loss of Baylor wideout Kendall Wright to Tennessee in this year’s draft flummoxed the Cleveland Browns, but now I do. It was a setback from which they still haven’t recovered.

OK, no one really knows just how good Gordon can be, or if he will even be any good. There are just no guarantees, but he’s not going to fail simply because the Browns drafted him as some media members would have fans believe.

The reality is he is going to struggle at times this year after sitting out all of last season, but hopefully he will also show enough flashes of his talent so that the fans and media can see whatever it is that the Browns saw in him.

It’s interesting that one of the biggest on-field questions about Gordon is that Baylor doesn’t have a playbook so Gordon will have a difficult time learning an NFL offense. But nobody seems worried about that in the case of Robert Griffin III or Kendall Wright, both Baylor players drafted in the first round this year. In face, may draft “experts” thought the Browns should have made a move to draft Wright with the team’s second first-round pick in April.

That may actually explain the backlash; since the Browns didn’t do what the media decided they were “supposed” to do in the draft then the Gordon pick must certainly be a mistake.

For his part, it sounds as if Gordon realizes the mistakes he’s made and is ready to work his ass off to prove everyone wrong.

“Despite everything I’ve been through, despite being a kid with a spotty background, the Cleveland Browns stuck their neck out and risked taking me and put their faith and belief in me, and I won’t let them down,” Gordon said in multiple published reports. “I’m grateful, and I know I can’t go back to being the person I used to be.”

That’s all Browns fans can ask for, really.

(Photo by US Presswire)