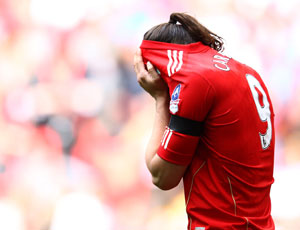 Even though it appears that Andy Carroll no longer has a spot in the Liverpool lineup, the club seems to be in no hurry to have the striker clear out his locker at Anfield.

Of course, the little fact that they paid £35 million for him less than two years ago is playing a key role in the decision.

Newcastle United – Carroll’s previous team and the one that pocketed all that transfer cash – is very interested in having him return. Newcastle originally said they would take Carroll on a season-long loan as long as Liverpool picked up a major portion of Carroll’s weekly £80,000 salary, but Liverpool rightly told them pound salt. Now Newcastle manager Alan Pardew is lobbying the team’s owners to up the bid for Carroll, possibly going as high as a reported £13 million, according to The Daily Mail.

But Liverpool reportedly is looking to get back at least £20 million from selling Carroll, according to The Guardian, and wants that cash to chase some other players, most notably Fulham’s Clint Dempsey.

With West Ham, Fulham and Randy Lerner’s Aston Villa also showing interest, Liverpool may be able to up the price on Carroll, but they still will take a major loss on the England international, who has scored just 11 goals in 59 appearances for the Reds.

But the squad can’t bring in any new players, presumably, until they unload Carroll, so hopefully they don’t overplay their hand and wind up without a chair to sit in once the music stops.