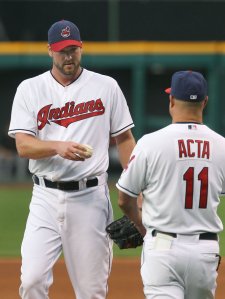 Another day, another disappointing outing from a starting pitcher for the Cleveland Indians.

Friday night it was Derek Lowe’s turn, as the veteran gave up nine earned runs, five walks and two home runs in just three innings of work in the Tribe’s 10-2 loss to Baltimore.

This is getting old.

Lowe’s outing is just the latest in a series of starts that make him look like the pitcher who went 4-10 with a 6.20 ERA after the All-Star break last season with Atlanta.

“This couldn’t be any more different than the way I started,” Lowe told The Plain Dealer. “I’ve got a lot of work to do. You can’t put your head in the sand and say, ‘Things will work out.’ ”

If it was just Lowe then maybe the Tribe could work around the problem. But he’s part of a rotation that, for the most part, has spent the month of July trending downward.

The struggles by the top three starters in the rotation have been a big part of why the Tribe has slipped from second place (1.5 games behind Chicago) in the standings on June 1, to third place (three games) back going into today’s games. In that time span, the Indians have also gone from being tied at the top of the Wild Card standings to 2.5 games back.

“We (traded for) Derek to go come over here and take the ball every five days and to give us innings,” manager Manny Acta said. “For the most part, he’s done that. No one here was anticipating him coming in and pitching the way he pitched the first month for sixth months.

We want to look at the standings and say the Tribe can still make a move if they just string a few wins together. After all, Detroit and Chicago still have nine games against each other which guarantees one of them will lose.

But then we watch the games and have to wonder if the Indians have it in them to actually go on a winning streak as they haven’t won at least three in a row in almost a month (July 3-5).

One thing we do know is this: with the Cleveland Browns ready to open training camp next week, the Indians window of relevancy is in danger of slamming shut. If the Tribe wants to make a move and keep the fans engaged, the time is now.