Here’s something to chew on Tribe fans 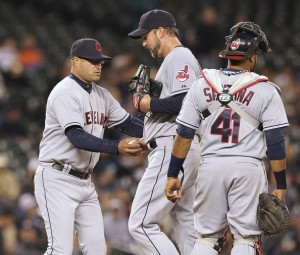 There are obviously lots of ugly numbers when you look at the Cleveland Indians, who entered Monday night’s series-opener against Oakland in fourth place, 16.5 games out of first in the American League Central Division.

For example, the Tribe has won back-to-back games just twice in their past 44 outings, and they haven’t won three in a row since July 3-5.

Here’s another one for you, Tribe fans.

Derek Lowe, currently in the New York Yankees’ bullpen, made his last appearance in a Tribe uniform on July 31 against Kansas City.

Lowe won his eighth and last game as a member of the Indians on July 4, a 12-3 win by the Tribe against the Angels (part of that long-forgotten three-game winning streak).

Despite all that, Lowe currently has the third-most wins by an Indians pitcher this season, trailing Justin Masterson (10) and Ubaldo Jimenez (9).

It’s been that kind of season.