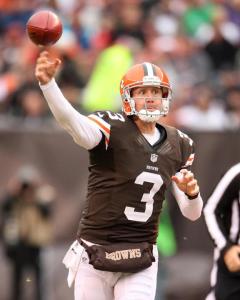 Good news for the Cleveland Browns as rookie quarterback Brandon Weeden says he will spend the bye week working to improve.

“I didn’t really do my part throughout the entire game for four quarters (and) help this team get in the end zone (against Baltimore),” Weeden told the team’s website. “There are a lot of different things. I think you have to take pride in scoring touchdowns. We talk about three points sometimes isn’t bad, but you have to score touchdowns. Just making the things that are routine, doing them 100 percent all the time, being 100 percent on the things that are routine, that’s where the great quarterbacks become great. That’s why they’re so great; they do the things consistently all the time. That’s what I’m working toward.

“If we’re able to do the things we’re able to do to get our team in position to win games, that’s all we care about. In the long run it’s about winning games and I feel like we’ve been in games where we’ve had a chance to win a couple and we’ve come up short. This bye week is perfect. I’ll go back and look through those games and see where we came up short and hopefully, we can fix it. We have a lot of season left.”

The Browns need to do something about scoring once they are in the red zone. Currently, they are 31st in the NFL – only one spot above Kansas City who, under offensive coordinator Brian Daboll, are one of the worst offenses in NFL history. The Browns have only scored a touchdown on 33 percent of their trips inside the opponent’s 20-yard line and, in the past three games, that number is 16 percent (no surprise after the Browns were 0-for-5 on Sunday).

“The field is shorter; it’s smaller and it’s fast,” Weeden said of the red zone. “There are a lot of bodies in a small area and the windows are tighter. There are extremes. They come after you; they blitz. The touchdown I threw to Josh Gordon was cover zero. They come after you, so, it’s difficult down there. It’s definitely difficult because you can’t stretch the field, but we have good plays down there. Sometimes, they have a good defense called up; sometimes, we don’t execute and then, if you do a combination of those two things, it’s a bad recipe for scoring points.”

We’d like to see Weeden be more aggressive and not be afraid to use the entire field (something that he seems to not be doing lately).

We would also like to see the Browns extend the red zone to say, the 30-yard line, and anytime they get there it should be automatically four-down territory. As awesome as Phil Dawson is as a kicker, his reliability can too often make the coaches too conservative. The Browns are 2-7; what do they have to lose?

Browns coach Pat Shurmur may not see it that way, however.

The Browns have some winnable games on what’s left of the schedule – KC (1-7), Oakland (3-5) and Washington (3-6)  come to mind – but whatever hope they may have to post another win goes down considerably if they can’t find a way to get the ball into the end zone.