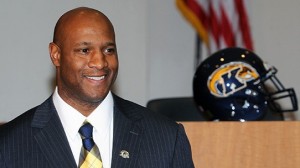 Paul Haynes, a former Kent State defensive back, was introduced on Tuesday as the Golden Flashes’ 21st football coach.

Haynes, who played for Kent State from 1987 to 1991 (a time period where we covered the team for The Daily Kent Stater, which oddly makes us feel really old), takes over for Darrell Hazell, who will be leaving Kent after the GoDaddy.com Bowl to take over the football program at Purdue.

“This has been a whirlwind, and I can’t begin to describe my excitement about the opportunity to come back to Kent State as head coach,” Haynes said. “Being a former player and assistant coach here, and now coming back at a time where there is so much pride around the football program and the university, it is unbelievable. My family and I are excited about coming back to Ohio. I’m looking forward to getting involved with the players and embracing the Kent State alumni.”

Head over to The Cleveland Fan for the rest of the story.