Of all the things to get worked up about … 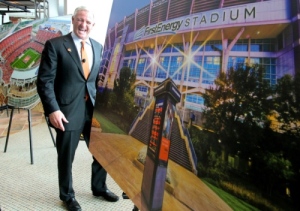 The Browns made it official on Tuesday, selling the naming rights to their home field to the Akron-based energy company.

“It’s a very special day for the Cleveland Browns, for FirstEnergy, and we believe, for Northeastern Ohio,” Browns owner Jimmy Haslam said during Tuesday’s news conference to officially rename the stadium. “It’s great to not only have partners who are going to be financial partners, but also big fans. We believe FirstEnergy and the Cleveland Browns share the same culture, the same desire to win. We’re tremendously excited about this opportunity.

“When we announced back in August that we did want this stadium to have naming rights, it was our sincere hope and desire that it would be a Cleveland or northeastern Ohio company for all of the obvious reasons. When FirstEnergy stepped up really early in the game and said they had an interest, it was a real pleasure for us.”

Sure, the name becomes silly when you add “Home of the Cleveland Browns” to it, as is the fact that FirstEnergy doesn’t want anyone to know how much they paid for the naming rights (although from the look of Haslam’s smile in the picture, it wasn’t chump change), but other than that it’s really not that big of a deal.

Just as no one outside of ESPN refers to the Rose Bowl as the Rose Bowl game presented by Vizio, no one who doesn’t draw a paycheck from the Browns will ever call the stadium by its full name.

Some fans are going to get worked up about the name change, much like they did when Jacobs Field became Progressive Field (which was odd because Jacobs Field was only Jacobs Field because Dick Jacobs paid to have his name put on the park). But just as everyone referred to Cleveland Municipal Stadium as the Stadium (we’re pretty sure the only people we ever heard use the full name were Gib Shanley and Nev Chandler when they opened a broadcast) fans will adapt. We know when we went to a Browns game or an Indians doubleheader, it was always at “the Stadium.”

Because it’s not the name of the stadium but the players on the field that matter. So many Tribe fans have an emotional attachment to the name Jacobs Field because the Indians were winning when the park first opened. Plus, when Jacobs Field opened, it was highly likely that there wasn’t anyone left in Cleveland who was alive the last time a baseball-only park opened in the city (League Park in 1891).

If the Browns can take some of the money and invest it into the team or into stadium improvements then that’s the most important part. They still need to figure out some of the real questions facing the franchise – who will new coach Rob Chudzinski hire to fill out his staff, who will rush the passer, can the team add some linebackers and secondary help, would they really consider bringing back quarterback Derek Anderson – then no one will think twice about the name hung on the sign of the building.

There’s also the little matter of the team still needing to fill the general manager (or whatever they will call it) position. Browns CEO Joe Banner reportedly declined to talk about a Pro Football Talk report that Kansas City Chiefs director of pro personnel Ray Farmer is the leading candidate.

So fear not, Browns fans, we have plenty to worry about – the name of the stadium just isn’t one of them.

(Photo by The Beacon Journal)