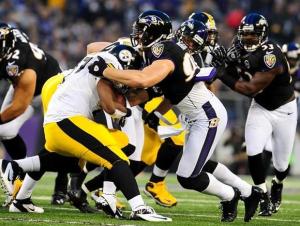 The Cleveland Browns jumped into the free agent pool with both feet on Tuesday, signing Baltimore linebacker Paul Kruger to a reported five-year deal worth $40 million (with $21 million guaranteed).

Kruger hit the national spotlight after recording 4.5 sacks during the playoffs, although people seem to want to overlook that he was shut out in the Ravens’ games against Denver and New England. And that the Ravens had to limit the time he was on the field in the Super Bowl because, as Pro Football Focus put it, he “has an awful habit of blowing contain in run defense when he tries to crash down on run plays.”

On the plus side, Kruger had nine sacks in 2012 during his first extended action in the starting lineup for Baltimore (he made six starts this season, bringing his four-year total to seven starts). Kruger earned a +7.9 grade from Pro Football Focus, the sixth-best of any 3-4 outside linebacker, and his 12.2 Pass Rushing Productivity was the highest score at his position.

He also has 55 quarterback pressures during the season, while no other Baltimore linebacker had more than 21.

Plus, $8 million a year is probably a fair price to a 27-year-old player that doesn’t have a lot of NFL mileage on his body.

Kruger and the Browns don’t exactly have history on their side with this signing, however. The list of Baltimore players that have left the Ravens and not been able to duplicate their success is long and distinguished: Adalius Thomas, Ed Hartwell, Bart Scott, Duane Starks, Gary Baxter and Jamie Sharper are just a few.

That would be more of a concern if Kruger was coming in to be the main man on the Browns defense, but his signing is most likely just the first move. The Browns still have opportunities to add some defensive playmakers in free agency and the draft; so while Kruger is a key piece of the puzzle, he doesn’t have to be the sole piece.

And, really, this is one of the reasons why the Browns brought in Ray Horton as defensive coordinator – he needs to figure out how to get the best out of Kruger as a full-time player.

All in all, not a bad start to the new regime’s first foray into free agency.

And if CEO Joe Banner can continue to keep GM Mike Lombardi distracted with game tape of Ryan Mallett’s four career pass attempts, the adults in Berea may be able to keep getting some good work done.