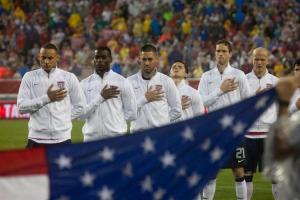 The U.S. Men’s National Team is coming to Cleveland, as U.S. Soccer announced on Wednesday that the team will host Belgium on May 29 in a friendly at FirstEnergy Stadium.

The match will kickoff at 8 p.m. and will be broadcast live on ESPN2.

It will be the fifth meeting between the teams, but the first time that the U.S. has played the Red Devils as the home team. The U.S. won the first meeting – at the 1930 World Cup in Uruguay – but has lost the last three meetings, all in Belgium, without scoring a goal.

Belgium is currently ranked No. 19 in the world and is sitting in a first place tie (with Croatia) in their qualifying group for next summer’s World Cup. Their squad includes Marouane Fellaini, Manchester City’s Vincent Kompany and Chelsea’s Eden Hazard.

“Belgium is definitely a team on the rise,” U.S. coach Jürgen Klinsmann said on the team’s website. “If you look at their roster, they have quality players from top to bottom who are on some of the biggest clubs in Europe. It’s a big opportunity for us and a great way to start the summer as we prepare for the World Cup qualifiers.”

The match will open a busy summer for the U.S. team, currently ranked No. 33, which will have three World Cup qualifiers in June, facing Jamaica, Panama and Honduras. Before they get to Cleveland, though, the U.S. will have to face Costa Rica a week from tomorrow and Mexico on March 26 – most likely without goalie Tim Howard.

They will then have the CONCACAF Gold Cup in July, where the U.S. has been drawn into a group with Belize, Cuba and Costa Rica. In the Gold Cup, the U.S. will be looking to reverse 2011’s loss to Mexico in the final – a match that ultimately cost coach Bob Bradley his job.

“We are excited about this summer’s Gold Cup,” Klinsmann said in a press release. “The tournament improves every cycle and the level gets better and better. As the host country, we get to play in different venues across the country, which is great for our fans. At the end of the day, we want to do well and make sure people understand that we want to be dominant in our region. Our goal is to win the competition.”

With its easy draw, the U.S. should advance to the final to face Mexico again, which would be the third meeting of the year between the rivals.