Browns make a move to help patch the offensive line 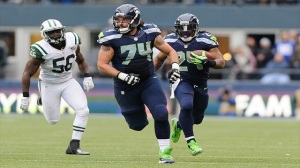 With the Cleveland Browns facing the prospect of being without guards Shawn Lauvao and Jason Pinkston until sometime after the start of the regular season, the team needed to do something to help keep quarterback Brandon Weeden upright.

The Browns clearly were not comfortable going into the season with just Garrett Gilkey, a seventh-round draft pick out of Chadron State, holding down the spot and, having a surplus of spare parts at defensive line, acquired John Moffitt from Seattle in exchange for Brian Sanford.

Moffitt, who is 6-foot-4, 319-pounds, is in his third year out of Wisconsin. That’s the good part, as if there is one thing that Wisconsin knows how to do it is create offensive linemen.

He started nine games his rookie year but suffered torn ligaments in his knee and had season-ending knee surgery. Last year it was an elbow injury in training camp that required surgery. So that part is not so good.

Moffitt was also one of five Seattle players suspended since 2011 for using performance enhancing drugs; in Moffitt’s cae it was Adderall. He was also banned from a Seattle mall property for twice getting caught urinating in public. Those parts are really not very good.

If nothing else, Moffitt adds much-needed depth on the offensive line. Worst case is he holds the fort down until Lauvao and/or Pinkston can return to the field. Best case, the change of scenery, and playing with a talented group of offensive linemen, helps him play like the player that was part of a Wisconsin offensive line that dominated Ohio State in 2010.