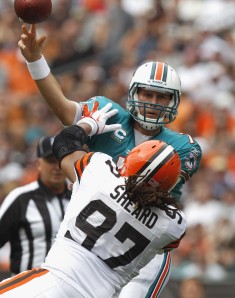 A little more than eight months after we last saw them in real game action, the Cleveland Browns return to the field today to open the 2013 NFL season.

The Browns will be at home, naturally, taking on the Miami Dolphins. Cleveland is 1-13 in season openers since returning to the NFL in 1999, a streak that would be nice to see them snap against the Dolphins.

Today’s game will mark the first game for Rob Chudzinski as an NFL head coach, the fifth time we have seen a coach make his NFL debut with the Orange and Brown since 1999.

Can Brandon Weeden avoid a repeat of last season’s opening game? What will a healthy Trent Richardson be able to do? Can Ray Horton’s attacking defense bring the pain on Miami quarterback Ryan Tannehill – even without first-round draft pick Barkevious Mingo?

We start looking for the answers in our Week 1 preview at The Cleveland Fan.