How should the Browns solve the Josh Gordon equation? 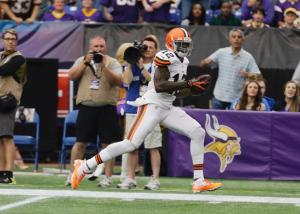 Cleveland Browns wide receiver Josh Gordon made one heck of a debut on Sunday in his return from a two-game suspension handed down by the NFL.

But even with all his talent, Gordon presents a particularly tough equation for Browns CEO Joe Banner, one that if Banner gets right could go a long way toward finally moving the Browns in the right direction.

We look at that and a few other leftover items from the Browns Week 3 win in Minnesota in our latest at The Cleveland Fan.

2 thoughts on “How should the Browns solve the Josh Gordon equation?”