Can the defense carry the Browns to the playoffs? 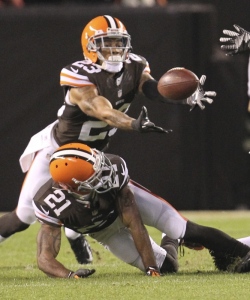 A week after Cleveland Browns defensive coordinator Ray Horton proclaimed that the defense had turned a corner, it appears that he may be right.

And if he is, it could mean a final seven-game stretch that could push the Browns into the playoffs.

If the Browns can bring the type of defensive pressure on Cincinnati’s Andy Dalton that they did against Kansas City’s Alex Smith and Baltimore’s Joe Flacco, they stand a chance of beating the Bengals in Cincinnati for the first time since 2008.

Pull out a win against the Bengals and suddenly things could get very interesting for the Browns.

We take a look at what the defense has been up to plus a few other nuggets from the Browns Week 9 win against Baltimore in our latest at The Cleveland Fan.