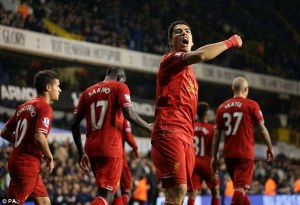 In a move that seemed unlikely just a few months ago, Liverpool is reportedly talking with Luis Suárez about a contract extension that would make the mercurial goal scorer the highest-paid player on the team.

According to multiple reports, Liverpool manager director Ian Ayre is in Barcelona to talk with agent Pere Guardiola about a long-term deal to keep Suárez at Anfield – and away from the big-money clubs on the continent.

All this after a summer of drama with a bid from Arsenal, Suárez publicly saying he wanted out (not just of Liverpool but out of England all together) and the club holding firm that he was not for sale at any price.

It’s a bit of a surprise – and definitely a bit of a risk – that Liverpool is now willing to talk about a new deal with a player who is under contract through June of 2016, primarily because of Suárez’ less-than-mature past.  But ever since returning from his 10-game suspension for biting Chelsea’s Branislav Ivanovic, Suárez has been tormenting Premier League opponents, scoring 17 goals in 11 league games.

Maybe the incident with Ivanovic was the breaking point, maybe Suárez is finally maturing, or maybe manager Brendan Rodgers has finally gotten through to his talented striker.

We’ve seen a different Suárez since he returned to the pitch. He still goes down a little more that we would like, but he has definitely cooled the diving and the whining to officials. But you just never know when the devil will come out in Suárez and something bad will happen. (Although you can be sure if it does it will be at the worst possible time.)

The flip side is that if Suárez really has finally figured it out, Liverpool will have one of the game’s best player’s under a contract that will hopefully keep his eye from wandering toward the East.

Are 11 games enough to judge if someone is truly rehabilitated?

That’s the big-money question; one that Rodgers and Ayre better hope they get right.

The Tribe finally decides to get into the game

After sitting mostly silent since the end of the 2013 season, the Cleveland Indians came to the realization the past few days that having some pitchers in the bullpen is kind of a necessity and got busy filling some holes by signing closer John Axford and trading for set-up man Josh Outman.

The reaction to the Axford signing has been mixed as no one really knows which Axford the Indians are getting. If it is the one who had 46 saves and an ERA of 1.95 with Milwaukee in 2011, then the one-year contract, for a reported $4.5 million with incentives, is a bargain.

And if they wind up with the Axford who blew all six of his save opportunities this season, lost his job as the closer and was traded by the Brewers to St. Louis in August? Well, it’s only on a one-year deal for $4.5 million.

The trade for Outman is generating more positive buzz – with a name like that, how could he not? – as the lefty reliever has held left-handed hitters to a .189 average in his career. Adding Outman to Marc Rzepczynski, who posted an ERA of 0.89 and held left-handed batters to just a .128 average after the Tribe acquired him at the trade deadline, will help the Tribe bullpen improve on its woeful performance last season against lefties.

“Our job is trying to piece together the best bullpen we can, and we feel we’ve had some progress,” Indians general manager Chris Antonetti told the team’s website. “We’ll continue to look to improve if we can. I feel good about the group that we have and I feel as though we’re improved from where we were at the start of the offseason. [Outman] is a left-handed pitcher with really good arm strength that’s had a lot of success against left-handers at the Major League level. So we feel he’ll fit into the bullpen and be a meaningful contributor for us this year.”

The moves to rebuild the bullpen may not be the type that drive off-season ticket sales, but if Axford, Outman and the rest do their jobs in 2014, that will go a long way toward helping the attendance issues.

In the long run, it probably doesn’t make much of a difference that the Cleveland Browns released cornerback Chris Owens this week.

Owens, who was signed to a one-year deal in free agency last spring, has been on injured reserve since Dec. 3 after playing in 12 games, mostly as a nickel back.

His release made us think back to free agency when the Browns were looking at not only Owens but also cornerback Brent Grimes, obviously the better player but also one coming off a season-ending Achilles injury.

Grimes ended up taking his own one-year deal, with Miami, and heads into this weekend’s game as Pro Football Focus’ fourth-best cornerback. Opposing quarterbacks have a passer rating of 65.9 when throwing to the receiver that Grimes is covering, he has 13 pass deflections (tied for the NFL lead among cornerbacks) and grabbed four interceptions.

It’s a classic second-guess, but Grimes would sure have looked good in the Browns secondary with Joe Haden.

While it is understandable that the Browns would be hesitant to sign Grimes because of the injury he suffered in 2012, it’s not like he broke the bank with his contract this year. He signed with the Dolphins for $5.5, and while that was five-and-a-half times more than the Browns paid Owens, it’s not as if the Browns don’t have considerable cap space lying around Berea.

Again, we don’t want to over blow this, but knowing when to take a risk on a player are the type of roster decisions that can help a team set itself apart from the competition.