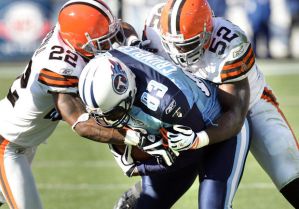 In a move that was surprising only in the sense that it happened today rather than say, next week, the Cleveland Browns released veteran inside linebacker D’Qwell Jackson on Wednesday.

Jackson was due a $4.1 million roster bonus on March 15 as part of the five-year contract extension he signed two years ago that included $19 million in guarantees. When you add the bonus in with his $3.93 million salary, that means the Browns would have had more than $8 million invested in Jackson for the upcoming season, followed by salaries of $7.73 million and $7 million in the following two years, entirely too much money to tie up in a player who is getting ready to hit the wrong side of 30.

The Browns reportedly tried to work out a restructured deal to keep Jackson in Cleveland, but ultimately he decided to try his luck elsewhere.

Jackson is a solid, if not spectacular player, and after missing most of 2009 and all of 2010 with injuries, it is a testament to him that he was able to get back on the field for the Browns the past three seasons.

But he has always been a player that seemed better than he was – especially if you only took his tackle stats into account. According to ESPN Stats & Info, Jackson has the fourth-most tackles in the NFL since 2011 with 418. Of course, that doesn’t take into account how many of those tackles came seven yards past the line of scrimmage, as opposed to in the backfield or at the line. And of the players on that list, Jackson is the only one of the top five never to make a Pro Bowl.

Jackson will be missed in the locker room more than he will be on the field, most likely, but the Browns will be OK. It’s always better to get rid of a player one year too early rather than one year too late, and his production has declined over the past two years. After being ranked by Pro Football Focus as the 13th best inside linebacker following the 2011 season, Jackson has slid to 41st in 2012 and 42nd in 2013.

While he is now a street free agent, free to sign with any team, Jackson isn’t actually out on the street. With all the hiring and firing the Browns have done since Jackson entered the league in 2006, there are plenty of coaches in the NFL who are familiar with Jackson’s game. The NFL is an interesting place – if you can play some team will find a spot for you, so Jackson should be OK.

As for the Browns, they were probably already in the market for an inside linebacker as they need to do something about Craig Robertson (who Pro Football Focus graded at -18.1 this past season); now that need is doubled. Either in free agency (a list that currently looks a bit … underwhelming) or the upcoming draft, it seems pretty likely that the team will be taking a hard look at several options at the position.

We wish Jackson well as he was a player who never dogged it on the field. It was just time for the Browns to move on.