Browns being smart – so far – in free agency 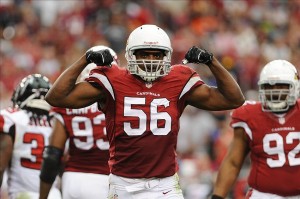 The Cleveland Browns had a nice start to free agency on Tuesday, agreeing to deals with inside linebacker Karlos Dansby and safety Donte Whitner.

Both move makes sense and give us confidence that the new regime of general manager Ray Farmer and head coach Mike Pettine may actually know what they are doing. They could undo that feeling with one reported move, which we will get to in a moment.

Dansby comes over from Arizona at a cost of $24 million over four years, with $14 million guaranteed. He had a career year in 2013, finishing with 122 tackles, 6.5 sacks and four interceptions, returning two of them for touchdowns.

Even though he is older than the player he replaces, D’Qwell Jackson, Dansby is a better player and will cost the Browns less over the next two years than they would have paid Jackson. So that’s a win. And while Dansby may be too old to contribute once the Browns get good, you could probably say the same about Jackson.

The Browns lured Whitner from San Francisco with a four-year deal worth a reported $28 million. Whitner will replace T.J. Ward, who agreed to a deal with Denver. Whitner is only a little more than a year older than Ward, is slightly better in coverage but slightly worse in run support, making the move basically a wash for the Browns. He had 103 tackles and two interceptions last season, allowing just two touchdown receptions, a major improvement from the 12 touchdown catches he allowed in 2012.

Whitner was also flagged five times for unsportsmanlike conduct last season, so keep that in mind this fall. (And while too many Browns fans think Whitner is a better player than Ward simply because he went to Ohio State, that means absolutely nothing at this level.)

The nice thing about Dansby and Whitner is they played most recently in the NFC West, which has turned into a division as tough as the AFC North, so they will fit right in with the Browns.

What has us concerned is the continued speculation that the Browns will make a trade for disgruntled Tampa Bay corner back Darrelle Revis.

It is important to remember what the ultimate goal is here. The Browns want to be a good team, but they also have to be a smart team.

The Buccaneers are not a smart team. We know this because they thought Greg Schiano was an NFL coach, and because they gave Revis a contract that will cost the team $16 million a year against the salary cap through 2018.

Now Tampa has grown tired of Revis after just one year and wants out of that contract. They also face a hard deadline to get something done, because if Revis is on the roster on Wednesday at 4:01 p.m. he is owed a $1.5 million roster bonus and the fourth-round pick that Tampa included as part of their trade with the Jets for Revis turns into a third-round pick.

Any team that trades for Revis inherits that contract, and while in theory they could work out a new deal, there is zero chance Revis will be on board with that. He was a contract problem in New York, which is why the Jets traded him to Tampa. What reason is there to think he would suddenly be open to a new deal?

Smart teams don’t make that kind of trade and, remember, we want the Browns to be a smart team. Why should they help Tampa fix its mistake?

If the Browns were to pay $16 million a year to Revis – a player who has never played a single down of football for the team – then what do they pay Joe Haden when it is time to give him a new deal? Sure, Haden isn’t as good as Revis and you can make the case that he has been a key member of the never-ending series of 4-12 and 5-11 teams, but at some point the Browns have to start rewarding some of their own players.

The Browns have been smart through the first day of free agency. If they can just make it through the next 24-48 hours without losing their heads, things will definitely be looking up around here.

6 thoughts on “Browns being smart – so far – in free agency”