The New York Jets made it official on Friday, releasing Mark Sanchez, their one-time franchise quarterback.

Yes, Sanchez led the Jets to the AFC Championship Game his first two years in the league. In the process, he won four road playoff games – or twice as many as the Cleveland Browns have won since joining the NFL in 1950.

The Jets won with Sanchez when they had a dominant defense and a strong running game – limiting what he needed to do on the field.

Yes, the Browns are working to build a dominant defense and, with the signing last week of Ben Tate, have remembered that you still need to run the ball, even in today’s NFL.

And, yes, the Browns are in the market for a quarterback, with just Brian Hoyer and Alex Tanney currently on the roster.

But there is no way the Browns should consider bringing Sanchez to town.

Since those first two golden years in the league, Sanchez has gone down hill. He turned the ball over 26 times in both the 2011 and 2012 seasons, and then missed all of last season following surgery on his throwing shoulder. (That seems kind of important when you are talking about a quarterback.)

Sanchez wasn’t the right player for the Browns in 2009, when they traded with New York so the Jets could take Sanchez at No. 5 in that year’s draft.

Why would anyone believe he is the right fit now?

Quarterback is not the only position the Browns still need help with, of course, with wide receiver quickly coming to mind. And while he is not a free agent, Philadelphia’s DeSean Jackson is someone the Browns should at least consider.

The Eagles are reportedly willing to trade Jackson for as little as a third-round draft pick – which is something the Browns just happen to have two of this year. 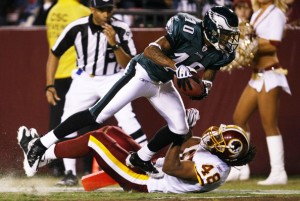 Unlike Sanchez, Jackson is coming off the best season of his career, with highs in receptions (82) and yards (1,332), while also catching nine touchdowns. In six years with the Eagles, Jackson has three 1,000-yard receiving years and two others where he exceeded 900 yards.

Adding him to a passing offense with Josh Gordon, Jordan Cameron and Andrew Hawkins seems like a pretty good idea, or at the very least something worth considering.

So what’s the catch?

For starters, Jackson is scheduled to make $10.5 million this year, part of a five-year, $48.25 million deal he signed less than two years ago. After his successful 2013 season, Jackson decided it was time to start talking about a new contract – even though he still has three years left on his current deal, one that he staged a training camp hold out to receive.

That’s a potential headache that general manager Ray Farmer may not want to deal with in his first year on the job.

There is also the question of why, contract issues aside, the Eagles would want to get rid of someone as talented as Jackson. Say what you will about Eagles coach Chip Kelly, but he knows offense, and it seems odd that he would be willing to send Jackson out of town after just one season on the job unless something is off.

While Jackson is a dynamic player, at 5-foot-10 and 175 pounds he is not very big. If the Browns were to add him, he would join Travis Benjamin (5-10, 175), Andrew Hawkins (5-7, 180) and 5-foot-8, 173-pound Dri Archer (after the Browns draft him with the third-round pick they don’t use in the Jackson trade) to form a modern-day Smurfs among the Browns offensive weapons.

As much as we like the Youngblood theory that you can’t hit what you can’t catch, the reality is that no matter how fast those guys are, eventually they are going to get hit at the NFL level. Having that many players who are that small may not necessarily work out. (Although as the defenses in Pittsburgh and Baltimore get older, think how much fun it would be to watch them try and catch the Browns.)

The upcoming draft is also reportedly deep with wide receivers; the Browns could simply draft someone who, while maybe not as talented as Jackson, won’t cost the team in excess of $10 million a year, either.

If the Eagles do decide to make Jackson available, the Browns certainly won’t be the only team interested. But they probably will be one of the few teams with a combination of cap space and draft picks to pull off a deal that would make sense.

At the very least, the Browns should make a call to the Eagles.

(Photos courtesy of The Daily News and The Associated Press)

2 thoughts on “Mark Sanchez? No thanks. DeSean Jackson? Maybe.”