Former Browns quarterbacks prove to be a resilient bunch 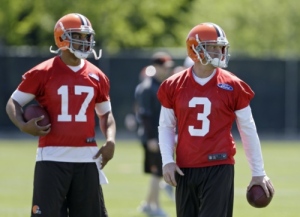 With the NFL now just a month away, the talk is heating up about who the Cleveland Browns will select – especially in the first round.

Many expect the Browns to select from the group of top-ranked quarterbacks that includes (in no particular order), Blake Bortles, Derek Carr, Teddy Bridgewater, Jimmy Garropolo, Tom Savage, Keith Wenning and Johnny Manziel.

If the Browns get it right, they shouldn’t have to worry about drafting another quarterback for at least a decade. (Imagine a world where we don’t have to talk about Browns quarterbacks every year.)

And if they get it wrong? Well, the secondary market for Browns quarterbacks in the NFL has turned into an especially fruitful one.

Depending on how things shake out between now and the start of the NFL season this fall, there could be as many eight former Browns quarterbacks on NFL rosters. Seriously.

And if Brady Quinn, spent time with St. Louis last season before going on injured reserve and having back surgery, finds a spot that will bring the number to eight.

Unbelievable. The Browns can’t find one decent starting quarterback but they can find plenty of second and third stringers.

We started thinking about all of this after seeing Weeden’s recent comments about his time in Cleveland.

“It wasn’t an ideal situation,” Weeden told SiriusXM’s Alex Marvez and Zig Fracassi. “The regime that drafted me was out a year after I got there. You never know the plans the group coming in has. I think, as a player, as much as you try not to do too much, try not to put too much pressure on yourself to perform and show you can be the guy for the long haul, sometimes you get caught up in it. You try to do much as a player. That’s one thing if I could change about myself, I wouldn’t try to do too much every Sunday. Just let the game kinda come to you and be more patient. I was ready for a kind of a clean slate and a fresh start,”

Cleveland. Where quarterbacks bide their time until they can get a fresh start somewhere else.