Liverpool continued its summer makeover with the news on Thursday that they have agreed on a transfer deal for Emre Can from the German club Bayer Leverkusen.

The 20-year-old Can for four goals in 39 games with Leverkusen last season after joining the club from Bayern Munich. He was a key figure as Leverkusen finished in fourth place in the Bundesliga.

“Emre Can has developed very quickly at Bayer 04 Leverkusen over the past 12 months,” Michael Schade, the club’s chief executive, said in a statement. “We wanted to keep Emre at Leverkusen but the release clause is part of his contract. So we wish him all the best and lots of success in his time in the Premier League.”

Liverpool may have pulled a bit of a fast one in prying Can out of Germany as Bayern had a buy-back option and reportedly were planning to recall him, but Leverkusen did not have to honor the deal if they moved Can out of Germany. When Liverpool called with an offer of £9.75 million, which was more than Bayern would have had to pay, Leverkusen jumped to gain the extra cash. (Although Bayern will still reportedly receive £1.2 million as “compensation.”)

Can has played for Germany at every youth level and drew praise from his coach, Steffen Freund, following his performance during FIFA’s U-17 World Cup three years ago.

“Emre is the most complete under-17 player I have seen in my entire career, and I have seen many,” Freund said. “He has what it takes to make it to the top.”

Hey, works for us.

Can should be a nice compliment next to Steven Gerrard in the midfield, and if things go right should be Gerrard’s eventual replacement.

He joins Rickie Lambert, who signed a deal with Liverpool earlier this week, as Rodgers continues to build a team that can compete not only for the Premier League title, but hold up to the challenge of Champions League play next season.

Tribe hits the road on a roll 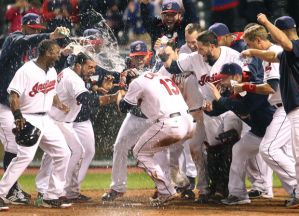 Somehow, in the span of just a few weeks, the Cleveland Indians have worked themselves back into the race in the A.L. Central Division.

Asdrubal Cabrera’s walk-off home run early this morning gave the Tribe a sweep of the Boston Red Sox and pulled the Tribe within 3.5 games of Detroit for first place.

The win was the Tribe’s second walk-off victory in the span of four games and their fifth of the season. It’s starting to feel a little bit like last season, when the Indians had 11 walk-off wins on their way to earning a playoff spot.

The Indians have now won six in a row, thanks to consecutive sweeps of Boston and Colorado, and nine in a row at Progressive Field. They have made it back to the .500 mark and, thanks to the Tigers losing 13-of-17, have shaved seven games off Detroit’s division lead since May 18.

We should learn if the Tribe finally has its act together or if the last six games were just a mirage, over the next two weeks. The Indians hit the road for 10 consecutive games, starting with a four-game series this weekend in Texas against the Rangers, in an attempt to improve on their Major League-worst 9-19 road record.

(Photos by Getty Images and the Cleveland Plain Dealer)