USMNT starts the party early in opening win against Ghana 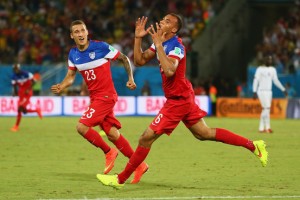 It was a start that the U.S. Men’s National Team dreamed of.

More importantly, it was a finish that the team so desperately needed.

John Brooks’ goal at the 86-minute mark gave the U.S. a 2-1 win over World Cup nemesis Ghana on Monday at the Arena das Dunas and the all-important three points.

“We have a great spirit and (we) fight until the last second,” Klinsmann said. “There is undoubtedly things that we need to improve. At the end of the day we got the three points.”

There was much to like from the game, starting with Clint Dempsey’s opening goal, which made him the first U.S. player to score in three different World Cups and allowed the U.S. to play from in front. It was the fifth-fastest goal scored in a World Cup match, which seems pretty amazing given that it only took 29 seconds for Dempsey to find the back of the net.

But it was the goal by Brooks that stands out the most, and not just because it was the game winner.

In the weeks leading up to the start of the World Cup, U.S. coach Jurgen Klinsmann was under a lot of fire for some of his player selections, with Brooks being one of the focal points of the criticism – in part because of his inexperience, but also there are some that still believe Klinsmann is relying too much on European Americans (Brooks is from Germany) as opposed to “true” American players.

In his first official game with the U.S., Brooks rewarded the faith his coach showed in him with that goal. It may have been just a case of being in the right place at the right time (Brooks was only in the game because of an injury to starter Matt Besler) but that is the genius of Klinsmann. He believes in his players and they carry that confidence with them onto the pitch. 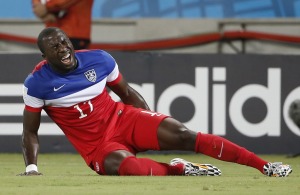 While the beginning and the ending were enjoyable, what came in between were some troubling aspects for the U.S, starting with the injury to Jozy Altidore, who may have blown out his hamstring just 21 minutes into the game. He is schedule to have it checked out further today, but it didn’t look good when he went down. There’s probably little to no chance he plays Sunday against Portugal, and may not be able to play next week against Germany. (You’d think that Klinsmann could find a Brazilian Mr. Han somewhere who could help out with Altidore’s hamstring, but that may be too optimistic.)

Midfielder Michael Bradley also had a off day. He seemed tentative and there were at least two or three times where it looked like he could have a solid shot on goal only to let the pass roll right by him. Not sure what was up, but the U.S. is going to need him to get things settled quick.

And the stats may show that Ghana had possession 59 percent of the time, watching the game it sure seemed like it was a lot higher. The U.S. continually turned the ball over and were saved by some solid defense and the fact that Ghana consistently sent many of their 21 shots wide or high of the net. If the U.S. can’t control the ball any better than that against Portugal, there is little doubt that it will be a much different story.

The U.S. now has until Sunday to rest up (Dempsey’s broken nose and Besler’s hamstring), figure out what to do without Altidore and fix up the passing game. Waiting for them is Portugal, which was embarrassed on Monday by Germany and will be without Pepe, who earned a red card during the game for an ill-timed head butt on Thomas Müller.

But Cristiano Ronaldo will be waiting, and he will not be as forgiving if the U.S. gives him the same opportunities they gave Ghana.

Grab another three points on Sunday and the U.S. will lock up a spot in the knockout stage with one game remaining in group play – something that seemed impossible to believe just 24 hours ago.

But after what we saw Monday night against Ghana, bet against the dream at your own risk.

We need to throw a shout out to the American Outlaws Cleveland chapter, who we joined to watch Monday’s game against Ghana.

Merry Arts Pub & Grill in Lakewood was literally standing room only as there had to have been more than 300 people packed into the place cheering on the U.S.

It was a great experience and, if you have the chance, get down there for one of the remaining games. You won’t be disappointed. (Although we recommend getting there a bit early if you can.)