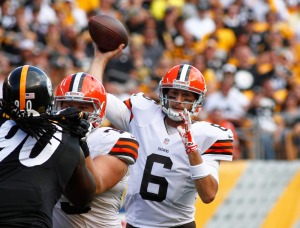 With the national media pining away for Johnny Manziel – CBS showed him almost as much on Sunday as the actual game – Hoyer refused to play along in leading the Browns to 24 second-half points and almost pulling off the franchise’s biggest comeback since 1966. (Funny, we don’t remember seeing many shots of Brandon Weeden on Sunday night while Tony Romo was crapping the bed against San Francisco.)

The best part is where Hoyer was among a group of veterans that challenged the team at halftime to get its act together.

“People realized that there were 30 minutes of football to play, and I think we just decided as a team to just go out and give it everything we got. The biggest thing is now we showed ourselves what we’re capable of. Now we have to go out and do it for four quarters. It’s too hard in this league to do otherwise.”

The fact that Hoyer – who had only played in a handful of games before Sunday’s start – stood up to the team shows that he is the kind of quarterback we want leading the Browns. This is not a knock against Manziel in any way – his time will come – but rather an appreciation of what Hoyer brings to the table.

It’s only one game, but it definitely seems like the Browns are going to be alright at the quarterback position.

And when was the last time anyone could say that with a straight face?

For many teams, season tickets are not just a piece of paper to hand out to fans to use for game-day admission, they are also works of art that are crafted to build excitement for the upcoming season.

“They are the jumping off point for the entire season (of design),” according to Chris Modarelli, the head designer for the Cleveland Browns.

Modarelli’s work was featured in a recent blog post by Tim Newcomb at howdesign.com.

For the 2014 season, Modarelli worked to create what Newcomb describes as an “aggressive, clean design.” To provide the tickets with a high-end look and feel, Modarelli added orange foil and a sculpted embossed look.

“The players are three-dimensionally sculpted and pop off the page,” he explained. “You can feel the wrinkles of the jersey and facemask and player’s face. It is very textured, very tactile.”

The article also takes a look at the season tickets for the University of Oregon’s football team, which this year added a scratch-and-sniff element to its season tickets.

This being Cleveland and all, we’re not sure that is an avenue that Modarelli should go down, however.