Browns vs. Jaguars – What to watch for in Week 7

The Cleveland Browns travel to sunny Jacksonville on Sunday to take on the winless Jaguars in a game that will help reveal whether or not this truly is a new Browns team.

The Browns are coming off a 31-10 beating of the Pittsburgh Steelers and, having won two games in a row, should have no trouble with a bumbling Jacksonville team that has lost nine consecutive games dating back to last season.

The game also is the first in a three-game stretch where the Browns will face rookie quarterbacks Blake Bortles and Derek Carr, and then most likely second-year quarterback Mike Glennon. It would be hard to script an easier stretch of games – at least on paper.

We’ve all seen the Browns in this situation before, where they have seemingly finally turned the corner only to somehow slam into a brick wall. If these truly are not the “same old Browns,” Sunday’s game is a perfect opportunity to show it.

“There are reasons why there are people out there saying that this is probably the week for Jacksonville,” Browns head coach Mike Pettine said in published reports. “All the circumstances where you would say this is a trap game, and I think as a staff, we’re just as curious to see. We’ll talk about it all week, but we’re curious to see how we will come out of the gate as well. We’re confident. We’re hopeful and confident that we’ll handle it the right way, but this is a big test for us.”

Quarterback Brian Hoyer, who has quickly become one of the team’s leaders, sent a clear message to his teammates earlier this week about the importance of not looking back.

“(Brian) said, ‘good teams practice harder after wins,’” right tackle Mitchell Schwartz said in published reports. “He said, ‘You have to come back and prove it again and prove it again. If we don’t prepare the right way we won’t be successful.’”

Not only would a win further distance the Browns from their predecessors, it would bring the team to two games over .500 for the first time since 2007. (Chew on that one for a while, Browns fans.)

It won’t be easy in sunny Jacksonville, of course, but where would the fun be if it where?

Here are three keys to look for if the Browns are to pull out a win.

Stop leaving it until late

It’s been terribly exciting, really, but it’s also an unsustainable model for a winning team to follow.

If the Browns can just play even a normal first half of offensive football, they can take what little crowd there is out of the game and force Bortles to have to make plays. This will be Bortles’ fourth start of the season, and so far he has four touchdowns against seven interceptions. He’s also run the ball 16 times for 106 yards, while being sacked 11 times.

“The success that he’s having does not come as any surprise. He can make all the throws,” Pettine said of Bortles. “People call him ‘Baby Ben’ because of the resemblance to (Ben) Roethlisberger. You can see some of that. He has the ability to extend a play. He’s scrambled for some key first downs. That’s certainly something that we’ll have to be on point with.”

Making Bortles have to do something to win the game seems like a pretty good strategy, which brings us to our next point. 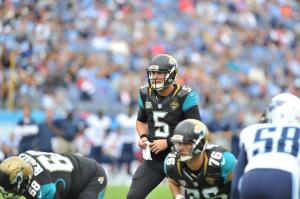 Because of injuries along the defensive line, the Browns were forced to simplify the defense last week against the Steelers.

The result was probably the defense’s best showing of the year, as they held the Steelers to a lone garbage-time touchdown and limited Pittsburgh to just six-of-16 on third downs.

With Bortles being a rookie the urge is strong to think the Browns should throw lots of complex looks at him to make things as confusing as possible.

“He knows where to go with the football, so we’re going to have to make sure that we disguise and do what we’re supposed to do and not let him get easy reads, especially pre-snap,” Browns safety Donte Whitner said. “Eventually, post-snap, he’ll have to figure it out, and by that time, hopefully our rush can get to him. But he can make all the throws, he’s confident back there, and he’s a tough guy.”

That sounds good and all, but maybe keeping things simple would be the best course of action again this week?

How the offensive line works without Alex Mack

The Browns face a huge obstacle now that they have lost center Alex Mack for the rest of the season due to injury.

John Greco will take over for Mack at center, and Paul McQuistan will replace Greco at right guard, meaning the Browns will have a new player and one playing out of position on a line that has been the NFL’s best through the opening weeks of the season.

Greco and McQuistan both did a nice job last week following Mack’s injury, and with a week of practice they should be settled in – hopefully.

“You can’t replace a Pro Bowl center who’s led that offensive line,” Hoyer said in published reports. “Obviously, Joe (Thomas has) been here longer than him, but when you’re the center, you’re making a lot of calls, you’re setting the huddle, things like that, things that you wouldn’t think about going into a game.

“You can’t replace that, but with John it’s a familiarity where — even going back to last year — he was the backup center at the time then. We had some familiarity. He’s going to be prepared because he works his butt off.”

As for McQuistan, “Paul has played a lot of football,” offensive coordinator Kyle Shanahan said. “He’s played almost every position, I believe, except center. He contributed a lot with Seattle last year, and that’s why we brought him here. We knew he could help us if we ever had an injury whether it’s at tackle or guard. He stepped in at guard and got us through that game.”

The Jaguars come into the game tied for second in the NFL with 19 sacks, so Hoyer better hope that Greco and McQuistan are up to the challenge.

As much as we never thought we’d be writing this, there really is no reason for the Browns to lose this game. They are the better team and are playing with a high-level of confidence after the comeback win against the Titans and last week’s beating of the Steelers.

But as we mentioned before, we’ve been here in the past with the Browns and have always walked away disappointed.

This year is different, though, because the Browns have Hoyer at quarterback.

Hoyer’s leadership, his ability to make a play when the Browns need it the most, while avoiding costly mistakes, is what sets this Browns team apart from its predecessors.

“Our defense believes in Hoyer,” cornerback Joe Haden said. “He’s been doing everything. He’s been doing a really good job of not turning over the ball, controlling the offense, getting first downs all the time … Just knowing that he’s moving the ball and the offense is making their progress, it just makes you feel a whole lot more comfortable.”

How long has it been since you’ve heard someone say they were comfortable with anything relating to the Browns’ offense?

The Browns are working hard each week to prove that they are not the “same old Browns,” and that work will continue this week with a win against the Jaguars.

(Photos courtesy of clevelandbrowns.com and jaguars.com)