Browns take care of business, but there are still concerns

The Cleveland Browns took care of business on Sunday, doing just enough on offense and making game-changing plays on defense to send the Oakland Raiders home as the NFL’s lone remaining winless team.

It may not have been pretty at times, but for a team that hasn’t won more than five games since 2007, we will take actual victories over moral victories every day of the week.

The more we think about it, though, the more we wonder why this has to be classified as an “ugly win.” Sure, the offense did not light up the scoreboard, but the last time we checked football is a team game; if the defense and special teams play well, but the offense struggles, why do so many people want to diminish the win?

“Our defense played great and we struggled a little bit on offense, but I think the mental toughness comes out when you’re struggling, struggling, struggling and then your defense gets a turnover and you’re able to capitalize on it and go up two scores and then we get another turnover and then two plays later you’re up 23-6, or whatever it was,” quarterback Brian Hoyer said after the game. “You’re not always going to win and it’s not always going to be pretty, but sometimes you have to win a game that way, and we were able to. It took the total team effort today.”

For far too long we’ve been longing for a defense that can carry the Browns and we may finally be getting our wish.

The defense forced three turnovers on Sunday – giving them six in the past two games – and sacked Oakland quarterback Derek Carr three times (Carr had only been sacked four times total coming into the game). All three sacks were from Paul Kruger, who has transformed this season from the Browns version of Nick Swisher into an actual productive player.

With the offense struggling, the defense has done a nice job over the past three games in keeping the opponent out of the end zone. Against the Raiders and Steelers, they gave up garbage-time touchdowns (which looks even more impressive after Pittsburgh’s showing against Indianapolis yesterday), and two of the touchdowns they allowed to Jacksonville were the result of turnovers. 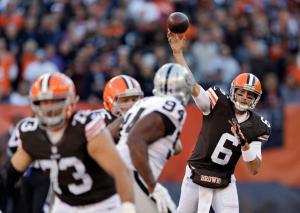 The secondary also appears to have turned a corner, as Donte Whitner caused a game-changing turnover on Sunday, Tashaun Gipson had yet another interception, Joe Haden and Justin Gilbert had solid games, and even Buster Skrine saw the officials pick up a flag when it looked like he would be called for pass interference on Carr.

Hoyer also continued his solid play at home, where he has posted a quarterback rating of 104.6, completed 63.6 percent of his passes, thrown for four touchdowns and not taken a sack. Hoyer’s play has been a big part of why the Browns are 3-1 at home so far this season.

“You’ve got to win your home games, and I think it’s great that our crowd was behind us — even though it was rough for a while, even at 9-6 when [the Raiders] were creeping back into it,” Browns coach Mike Pettine said. “We knew we would have the crowd with us. In the times where we needed them, they were there for us. We felt that it would be a little bit easier to get them going being a [4:25 p.m.] start with three extra hours of lubrication. It was great to hear them at the end. They were going. It definitely helped.”

That’s not to say that Sunday’s performance did not continue to raise some concerns.

Ever since losing Alex Mack to a season-ending injury, the running game has been non-existent.

Against the Raiders, Cleveland rushed for just 39 yards and a 1.6-yard average, the lowest per carry average in a single game since the team returned in 1999. Sunday’s effort makes last week’s output against Jacksonville – 69 yards on 30 carries and an average gain of 2.3 yards – look worthy of praise.

We understood last year when the Browns could not run the ball because they were using Willis McGahee, Fozzy Whitaker and Edwin Baker. But even without Mack, the trio of Ben Tate, Isaiah Crowell and Terrance West should be able to do better than average 1.9 yards over their past 55 combined rushing attempts.

Speaking of the team’s three-headed running attack, while we don’t think splitting time between three running backs is a good idea, having three backs that can (presumably) run the ball means if two of them are struggling, you should be able to give the third some work, but Crowell only carried the ball once against Oakland as the Browns continue to worry about his ability to hang onto the ball in a crucial situation.

“In hindsight, we did want to get (Crowell) more touches but just the way the game fell, especially at the end, we went with Ben (Tate) to finish the game out,” Pettine said on Monday. “More from his history of protecting the football, we felt better about it. Isaiah, obviously, had the issues against Pittsburgh. It was just a risk-reward thing. We wanted Ben to finish the game out. It’ll still come down to this week of practice, but I think we all would like to see Isaiah get more touches.” 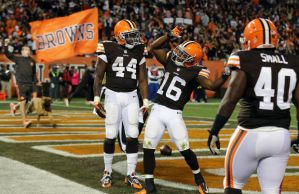 The lack of a running attack has also caused considerable damage to the team’s third-down efficiency. Going back to the Pittsburgh game, the Browns have converted just 20 percent of their third-down attempts (10-of-40), which places even more pressure on the defense.

It’s not going to get any easier any time soon, either, as the Browns are still struggling to find an adequate replacement for Mack (they tried Nick McDonald this week and he earned a -4.4 grade from Pro Football Focus), are three games away from Josh Gordon’s return, and lost tight end Jordan Cameron to a concussion on Sunday. If Cameron can’t go this weekend against Tampa Bay, it seems possible that he would also miss the Cincinnati game as it comes only four days later.

Those are all issues that the Browns are going to have to figure out sooner rather than later, but for now we’re focusing on the fact that the team has four wins after seven games for the first time since 2007 and is right in the playoff hunt in the AFC North.

“As far as our play, you’re going to have games like that,” Pettine said on Monday. “I think when you look back at your wins there are going to be some ugly ones. That one certainly wasn’t the prettiest, but I’ll sit up here and talk about ugly wins for a lot of Mondays.”

And really, what Browns fan can find anything wrong with a victory Monday?

(Photos courtesy of clevelandbrowns.com and The Plain Dealer)