Browns may have saved season against Atlanta

It has been 24 hours and a small part of us is still wondering just how the Cleveland Browns walked out of Atlanta with a victory on Sunday.

It may not have been pretty at times – OK, it was downright ugly at times – but the win symbolized what this current Browns team is all about as, more times than not, they find a way to win.

The victory brings the Browns to 7-4 and keeps them very much in the playoff race in the AFC North Division. The record represents the team’s best mark after 11 games since 2007 (we’ll come back to that season in a little bit), and is just the fourth time since returning to the NFL in 1999 that they have won at least seven games.

The win was also the team’s second consecutive on the road and their third road victory of the year. It was 2008 since the last time the Browns achieved either of those marks. The Browns have also yet to lose consecutive games this season.

Finally, the win means the Browns are ensured of breaking a six-year streak of losing at least 10 games in a season.

Even though the Browns won, there are still some issues surrounding the team. Here are the three takeaways for us from the game:

Josh Gordon returned to the lineup after missing the season’s first 10 games due to a suspension and it looked like he hadn’t missed a single day.

Gordon finished with eight receptions for 120 yards (similar to what he did in his return last season in catching 10 passes for 146 yards; the only different was he didn’t find the end zone this time) and clearly opened things up for the rest of the offense.

Isaiah Crowell and Terrance West combined for 150 yards on the ground (Hoyer added another 12) as the Browns had their best day running the football since the season opener, finishing with 162 yards on 29 carries (a tidy 5.6 yards per carry) and two rushing touchdowns.

“(Josh) opened a lot of stuff in the run game by going deep on some passes. He really helped me a lot.” – running back Isaiah Crowell

The Falcons came into the game with one of the NFL’s worst defenses against the run, so it would seem reasonable to expect the Browns to have a big day. But with the way they’ve been running the ball since Alex Mack’s season-ending injury, there are no guarantees.

But something obviously changed on Sunday (and it wasn’t center Nick McDonald, who had another poor game). It helped that the Browns went with just two running backs, but you can’t discount the fact that the Falcons had to account for Gordon whenever he was in the game.

In a nutshell, it’s great to have Gordon back.

The coaches did not have a good day 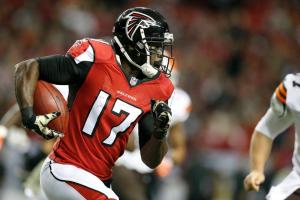 This may have been, collectively, the worst day the Browns coaching staff has had this season.

For reasons that still escape us, head coach Mike Pettine decided to have Billy Cundiff try a 60-yard field goal at the end of the first half – despite the fact that Cundiff has converted just 28 percent of his field goal attempts of more than 50 yards in his NFL career.

“In hindsight we probably should have been a lot smarter (at the end of the first half.” – head coach Mike Pettine

Pettine the doubled down on the madness after Cundiff’s miss was negated by a timeout from Atlanta coach Mike Smith – who somehow decided it was a good idea to ice a kicker who barely had a one-in-four chance of making the kick – by deciding that this time, surely, Cundiff would make the kick.

Thankfully, as Devin Hester darted down the field with the ball after fielding Cundiff’s woefully short kick and we reached for the Cleveland-brand bourbon, Joel Bitonio came out of nowhere to bring Hester down before he could reach the end zone.

Not one for Pettine’s highlight reel. And where going to throw special teams coach Chris Tabor in there as well for failing to be the voice of reason on the sideline during the whole fiasco.

Offensive coordinator Kyle Shanahan deserves his share of the blame as well, primarily in the middle of the fourth quarter. With the Browns running the ball so effectively and the team driving for what would probably have been a game-clinching touchdown, while also looking to work the clock, why call a pass play on first-and-goal from the six-yard line? Especially on a day when your quarterback is struggling?

Thankfully, the Browns were able to overcome those mistakes.

It’s long been true that quarterbacks get too much credit when a team wins and too much blame when they lose.

But we’re not sure we’ve seen anything like what is currently going on with Brian Hoyer, who despite helping the Browns to a 7-4 record has become the most divisive player in Cleveland.

Hoyer had a bad day on Sunday – right up until the Browns needed him the most. Hoyer overcame three interceptions, two of which came in the fourth quarter, to lead the team to its fourth fourth-quarter comeback this season.

On the final drive, Hoyer moved the Browns 61 yards by going three-for-three (all for a first down) against the Atlanta blitz. (According to EPSN Stats & Information, Hoyer had been three-for-11 up to that point against the blitz.)

“Even though he hadn’t played up to his ability because of the interceptions up to that point, we knew he was going to throw to the right guy,” left tackle Joe Thomas said after the game. “That’s something you see in great quarterbacks. They have maybe three-in-a-row bad plays, but in their mind, they are 100 percent sure the next play is a touchdown throw. That’s what he has and that’s what special about him.”

“I think the guys realize we wouldn’t be where we are without Brian Hoyer.” – head coach Mike Pettine

Hoyer may not be solely responsible for the Browns sitting a half-game out of first place, but he has played an important role in getting the Browns to that point. Yesterday’s game was a perfect example of what Hoyer brings to the table – Hoyer was so very close to having Atlanta be his “Cincinnati in 2007 game” – but he has the ability to not let the situation snowball when things are not going in the Browns favor.

He did it against Pittsburgh in the season opener (even though the Browns lost), he did it against Tennessee and New Orleans, and he did it again yesterday. While he may not have the physical talents of some quarterbacks, his ability to bounce back can’t be understated.

We’re not really sure what more Hoyer can do at this point (he definitely should not have his entourage get into fights at 2:30 in the morning), nor do we completely understand how we’ve reached the point as a fan base where we can complain about a team that is 7-4.

The Falcons may have lost the game as much as the Browns won it, but we’ve seen the Browns be on the other side of that scenario far too many times over the years.

The Browns are now finding ways to win games – rather than losing them – and because of that they may have saved their season on Sunday in the Georgia Dome.

What is there to complain about with that?

(Photos courtesy of The Plain Dealer and atlantafalcons.com.)