Is next year’s starting QB currently on Browns roster? 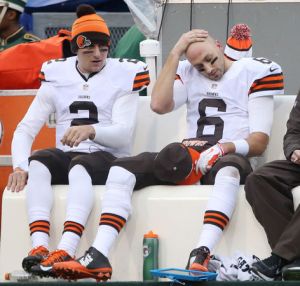 Johnny, be a lamb and grab that Roman Burger out of my bag.

The Cleveland Browns found themselves caught in a tale of two-and-a-half quarterbacks in 2014.

Through the early part of the season, Brian Hoyer looked to be writing the kind of “hometown kid makes good” story that everyone loves, with his play bringing about talk of a contract extension and the requisite stability for a player who had bounced around the league.

Even after the season-ending injury to Alex Mack started to derail the season, Hoyer did what he could to keep the offense on track. A nationally televised beating of Cincinnati and a game-winning drive against Atlanta had the Browns at 7-4 and dreaming of division titles and the playoffs.

But even from those lofty heights their were warning signs.

Hoyer followed-up the Atlanta win with a poor showing in Buffalo, a game that culminated a three-game stretch that saw Hoyer post the worst three-game stretch by a quarterback since 2007, according to Pro Football Focus, as he threw six interceptions against just one touchdown while seeing the Browns drop two-of-three.

After throwing for just 136 yards, and being picked off twice, in what was a winnable game against Indianapolis, Hoyer left head coach Mike Pettine no choice but to turn to an unready Johnny Manziel with the Bengals coming to town.

Manziel responded by making Hoyer look like Brian Sipe in his prime. 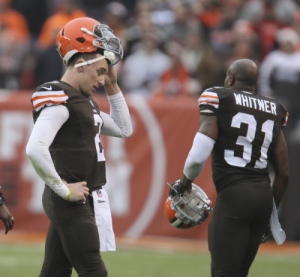 Johnny Football finished the game just 10-of-18 for 80 yards (32 of which came on one pass and run to Josh Gordon), with two interceptions and three sacks. The Browns were just one-of-10 on third down, only had five first downs all game — two of them came on penalties — and amassed 107 yards of total offense.

Manziel’s and Hoyer’s seasons both ended the following week against Carolina thanks to injuries, and the Browns were forced to turn to third-string rookie Connor Shaw for the season finale.

So after 16 games, and hours upon hours of practice and film study, the Browns head into the off-season no closer to having a starting quarterback than they did at this time last year.

Hoyer is an unrestricted free agent and, despite the lure of playing for his hometown team, may decide it is one again time to move on. Or general manager Ray Farmer may make that decision for Hoyer.

Manziel vowed to start taking things seriously now that he is done with his rookie year, apparently under the impression that it was OK to take a redshirt year without telling anyone. Since making that announcement, Manziel has been in South Florida, Texas, Aspen and who knows where else.

A day after looking at who may be calling the plays for the Browns next season as offensive coordinator, today we’ll take a look at who may be executing those plays on the field come September.

Back with us today are:

Jeff Rich, a Senior NFL Writer at More Than a Fan; co-host of Rapid React on MTAF Cleveland; and who is heard live on Sundays from 11 a.m. to 1 p.m. at sportsbyline.com. Find him on Twitter @byJeffRich.

David Zavac, a Browns season-ticket holder and editor of Fear the Sword, who can be found on Twitter @fearthesword.

Dave Kolonich, who’s been known to hang around on Twitter @DaveKolonich.

Ryan Alton from Draft Browns, who can be found on Twitter @RyInCBus.

Today’s question: Is the 2015 starting QB currently on the roster?

Jeff: Probably. I mean, how many times can you try to do the quarterback thing over and over again? Sink or swim with Johnny Manziel, and find a capable backup that is not currently on the roster and has no realistic expectation of starting in any event other than injury. If Manziel is the starter, give serious consideration to Michael Vick. Vick’s hindsight reveals how great he could have been for taking this NFL thing seriously. 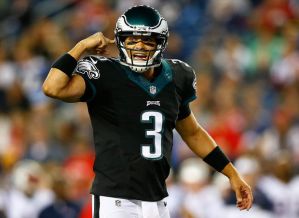 Six years after passing on him in the draft, could Mark Sanchez be the answer for the Browns at quarterback?

Jared: No. I’m guessing more words here would be helpful. I expect the Browns to bring in a veteran quarterback with the expectations that he will be the starter. Johnny Manziel was told Brian Hoyer would be the starter before coming to Training Camp and prepared terribly by all accounts. He will get to practice once again. Whether that QB is Ryan Mallett, Mark Sanchez, Jake Locker or Brian Hoyer is for Ray Farmer and Pettine to decide. I also expect them to draft a QB this year and would not be shocked if it was Marcus Mariota if he starts to fall in the first or Brett Hundley in the second.

David: Ideally, Johnny Manziel is given every opportunity to prove that he should be the starter. I think it’s fair to question his talent, work ethic, intangibles, everything, but it’s probably not fair to come to hard and fast conclusions. One of the reasons I wanted Manziel to finish the season over Brian Hoyer was to get him a taste of failure. As far as I can tell, Manziel has never really failed at anything. If the speed of the NFL, the doubts of his teammates, the departure of Kyle Shanahan, etc. can act as a catalyst for Manziel to get to work and salvage a career, that’s awesome.

All that said, I’m not sure you can count on him being ready to go and earn that job, and I’d want to give him another Brian Hoyer type veteran quarterback to compete with. Matt Moore, Mark Sanchez … these are not ideal names, but can provide a baseline level of competence.

The Browns tried one former New England quarterback, should they take a look at another in Ryan Mallett?

Mike: Ahh. No. Perusing the unrestricted free agent quarterback list, I’d be kicking the tires on Jake Locker and Mark Sanchez and willing to attempt a reclamation project on Christian Ponder or Blaine Gabbert. The internal discussions I’m having now concern whether to continue happy-talking Johnny Manziel to the public or to punt on that experiment now … the internal discussions are not in the vein of “can we develop him and build around him.”

Dave: No. And bonus laughs if the answer is Connor Shaw.

Ryan: I don’t think so. Unless Johnny Manziel has a “come to Jesus” moment in the offseason I do not believe he will show up in the spring displaying that he has put in the time and energy to learning the playbook. He’s a joke. Meanwhile, Ray Farmer and Mike Pettine are tasked with finding a quarterback they can trust with their jobs this offseason. That person is not Johnny Manziel. I would expect to see them bring in a veteran through free agency that they can depend on and then draft one fairly early. I know, easier said than done, but I think Johnny wore out his welcome fairly quickly in Berea.

Coming tomorrow: Who of their own free agents should the Browns look to keep?

2 thoughts on “Is next year’s starting QB currently on Browns roster?”