It was Kyrie Irving’s world on Wednesday night at Quicken Loans Arena, and we were all just witnesses.

Irving set an arena record by scoring 55 points in the Cavs win against Portland. In addition, Irving now holds the franchise record for 3-pointers made (11) and attempted (19). He joins LeBron James and (bonus points if you remember) Walt Wesley as the only Cavs players to break the 50-point mark in franchise history.

Irving’s 55 points are the fourth-most by a player whose team did not score 100 points in a game in NBA history. He joins George Mikan, Michael Jordan and James on that list. He becomes the first former Duke player to break the 50-point barrier in an NBA, and joins Wesley as the only other Cavs player with a  50-point game at home. Wesley’s 50-point game came against Cincinnati on Feb. 19, 1971, while James’ eight 50-point games as a Cav have all come on the road. (All according to ESPN Stats & Information.)

“What Kyrie did is for the pantheon,” head coach David Blatt said. “That’s something that everybody here in Cleveland will always be able to relish and treasure.”

The win was the eight in a row for the Cavs, but while they have obviously been turning things around for a few weeks now, this win felt different.

With LeBron James sitting out with a  sour wrist, everyone in wine and gold not named Kyrie Irving struggled. Consider that:

This is a game that the Cavs would have probably lost just a few weeks ago, but Wednesday night they found a way to win against a quality opponent without James in the lineup and with much of the team struggling.

This is also a game that, later in the season, we may look back on as the true turning point to the Cavs season.

Interesting comments this week from Joe Haden and Karlos Dansby, defensive leaders for the Cleveland Browns, on the Johnny Manziel front.

Haden and Dansby are both in Arizona for Super Bowl-related activities (sadly, though, not in a playing capacity) and both had the opportunity to speak on Manziel in the wake of an ESPN story where an unnamed Browns player called Manziel a “100 percent joke.”

But rather than echo those anonymous sentiments, Haden and Dansby chose to come out in support of their embattled teammate.

“Johnny is definitely not a joke,” Haden said in published reports. “Johnny takes too much bashing for nothing and the thing is that being a quarterback in the NFL is so much harder. They can’t do anything. If Johnny is to do anything that shows him having fun instead of being in the meeting room, they blow him up.”

Dansby said that Manziel, like fellow rookie Justin Gilbert, have what it takes to succeed in the NFL – if they are willing to work at it.

“They’re young and this was their first year,” Dansby said. “Like I said, they didn’t know what to expect going into it, but now they know it’s a man’s game. And I think they’ll make the adjustments, because they have made the adjustments in college to be successful. Hopefully this offseason we’ll see the improvement and it will carry over into the season.”

It is interesting that Haden and Dansby are willing to go on the record in support of their teammates while those criticizing Manziel won’t let their names be attached. (Although former NFL head coach Brian Billick had no such trouble.)

Frankly, we’ve reached the point where we’re not sure what to make of the whole situation.

While it’s great that Haden and Dansby have their teammates’ backs, their words can only go so far. As Dansby pointed out, it’s up to Manziel (and Gilbert) to take ownership of their careers if they want to be successful.

As of today, we’re more likely to side with Billick than Dansby or Haden as we are not comfortable with the thought of Manziel taking over as QB1 of the Browns. Over the next seven months it will be time for actions to speak louder than words for Manziel.

An up-and-down night for the USA 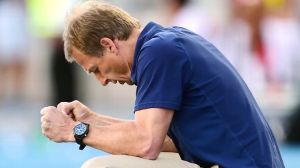 It was a bit of a mixed bag on Wednesday night in Chile in the opener of what is going to be an interesting 2015 for the U.S. Men’s National Team.

Jozy Altidore and Brek Shea looked good in finding the back of the net, and DeAndre Yedlin continues to impress, but the defense was lacking, especially in goal as Nick Rimando let in three goals as he took over for the injured Tim Howard.

Rimando’s play reveals what a drop off there is when Howard is not in goal, and make us nervous for the day that Howard is no longer fit for international duty.

A more immediate concern, however, is that the loss shows that the U.S. has a lot of work to do as they prepare for a year that will include the Gold Cup this summer and the opening in November of the qualifying for the 2018 World Cup.

We’re also going to find out a lot about the core of this squad, which includes 10 players who saw action in last summer’s World Cup who will be playing this year for MLS clubs. If those players want to show head coach Jurgen Klinsmann that playing in the MLS, as opposed to the more talented European leagues, isn’t a mistake, they better be ready to prove it when they take the pitch with the national squad.

They can start by reversing a trend that, as Brian Straus at Planet Futbol points out, has seen the team win just one of its last nine matches since beating Ghana in the World Cup opener. The U.S. has now lost three consecutive matches for the first time in eight years, and the loss to Chile represents the fourth time in five games that the Americans have blown a halftime lead.

For his part, Klinsmann took a big-picture approach to the match.

“I saw a lot of things that are encouraging and positive. We tried to break in younger players step-by-step, but it’s not going to happen overnight. They need to have more time on the field,” he said. “There was good stuff out there for over 60 minutes — very promising. Obviously if you can’t get the tempo anymore, go with them at the same tempo, you’ll give them opportunities and they’ll put them in. It was a close game, it was exciting and a good test at the beginning of the season.”

Klinsmann is challenging the squad with an upgraded slate of friendlies, as the U.S. is scheduled to take on Panama, Mexico, Denmark, Switzerland, the Netherlands and Germany this year. Hopefully raising the level of competition will pay off this summer during the Gold Cup – which may be the first time this year we’ll see the “true” team — and later on this year when the next World Cup-qualifying cycle begins.