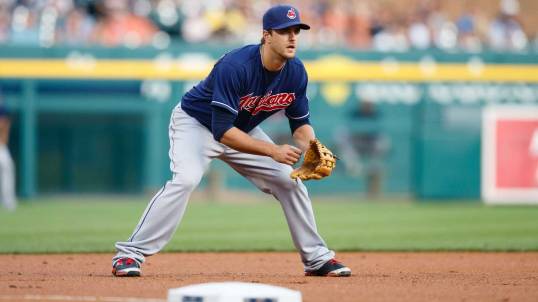 For the majority of our life as a Cleveland Indians fan, the franchise has been bad (or worse) far more than they have been good.

But there has generally been one position that has consistently been a bright sport the Tribe – third base.

Starting with Buddy Bell in 1973, who hit .274 and played Gold Glove-caliber defense (even he wasn’t recognized with an actual Gold Glove) for seven seasons, through Toby Harrah and Brook Jacoby, the position was solid, if unspectacular for the better part of 17 years.

The Tribe hit what could be described as the golden era of the position in 1994, when the team started a nine-year stretch where the hot corner was manned by Jim Thome, Matt Williams and Travis Fryman, During that time the Tribe made the playoffs six times and won two American League pennants.

Since Fryman’s retirement following the 2002 season things haven’t been as prosperous, but the likes of Casey Blake, Aaron Bone, Jhonny Peralta and Jack Hannahan had their moments.

Which brings us to the 2015 season and Lonnie Chisenhall.

The Tribe enters the season carrying some big expectations, as many are predicting them to challenge for the Central Division title and Sports Illustrated tabbing Cleveland as the eventual World Series champion.

While Michael Brantley, Carlos Santana, Jason Kipnis and Yan Gomes will carry much of the attention, the Tribe needs Chisenhall to solidify his hold on third base and give the team a consistent presence at the position.

It seems as if we’ve been hearing about Chisenhall as a prospect for several years, but last season was the first time in his four years with the club that he stayed up for the entire season. The Tribe was so unsure of Chisenhall that they opened the season with Carlos Santana as the starting third baseman.

Once the Tribe realized the Santana at third experiment was a dead end, they turned back to Chisenhall, who responded by hitting .342 with nine home runs and 41 RBI prior to the All-Star game.

Things fell apart in the second half of the season, however, as Chisenhall hit just .218 with four home runs and 18 RBI.

“I think [the hot streak] started with the approach that I had a good idea of what I was doing every at-bat,” Chisenhall said last week in published reports. “Once you get hot, you get away from that routine a bit and ride the hot streak. That’s where I stumbled a bit at the end.”

However, if you look at his overall numbers — a .280 average with 13 home runs and 59 RBI – the Tribe would probably sign off on that right now if they knew that Chisenhall’s performance was going to be a bit more steady than last year’s peaks and valleys.

Chisenhall had a solid spring, batting .327, which hopefully means he’s not filling any layover from the second half of last season.

While Chisenhall may finally be figuring things out at the plate, his defense is still a concern.

After making a team-high 18 errors in 2014, Chisenhall made five errors during spring training.

“I think (Lonnie’s) still working on things,” manager Terry Francona said in published reports. “I think his reflexes are better. His arm is strong. I think he sometimes doesn’t get quite as aggressive enough quite off the bat and then he has to do things to make up for it and then maybe lets the ball go this way as opposed to getting his feet under him. Because when he does, he’s fine.”

Chisenhall will never be confused with Fryman or Hannahan in the field, but he needs  to get a handle on the defensive side of the position.

The Tribe doesn’t need Chisenhall to carry the club, but they do need to know what they are getting from him on a day-to-day basis. If Chisenhall can settle down in the field and carry a consistent bat to the plate, that will help him take his place in the lineage of Tribe third baseman.

And, more importantly, it will go a long way toward helping the Tribe live up to the preseason expectations being placed on the club.