Cavs just the latest Cleveland team on the what if list 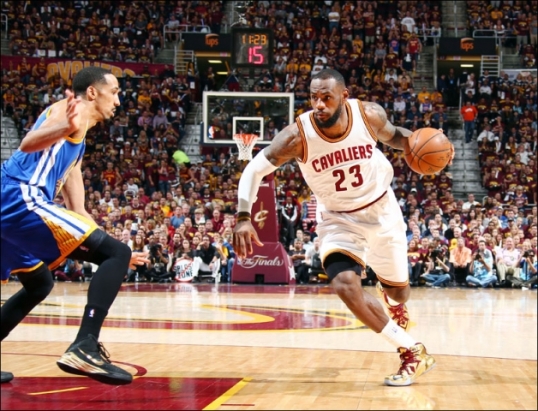 They gave everything they had for as long as they could, but in the end it simply wasn’t enough.

So now their watch has ended.

After a franchise-record 102 games, four rounds of playoffs and the second trip to the NBA Finals in franchise history, it finally came to an end on Tuesday for the Cleveland Cavaliers, who ended the 2014-15 NBA season the way they began it – with a loss on their home court.

As disappointing as it was to watch the Cavs miss out on the first title in team history and, in the process, end Cleveland’s ongoing title drought, it’s hard to see how this could have turned out differently. Because of injuries to Kevin Love and Kyrie Irving, too many players were forced into roles where they were asked to do too much as head coach David Blatt simply ran out of options along with healthy bodies.

“We would have loved to have come into the series as a whole team,” Blatt said in published reports. “I feel badly for Kevin and for Kyrie because they did so much during the course of the season to help us get here. We’re not here without either one of those guys and obviously having had them in this series would have been significant.

“But we never asked for sympathy when they went down. We never made an excuse and I certainly won’t do that now. We played our hearts out.”

Ultimately, playing without Love since the opening round of the playoffs, and without Irving intermittently until he went down for good in Game 2 of the Finals against Golden State, caught up with the Cavs and while the hearts were willing, the bodies simply couldn’t hold up any longer.

The loss of Irving and Love is what stings the most, because even without them the Cavs put up a good fight and someone will have to work even harder than Matthew Dellavedova to convince us that the Cavs would not have won the title if Irving and Love had been healthy for the series with Golden State.

But instead of sweeping up confetti and planning parade routes, this Cavs team joins a growing list of Cleveland sports moments that leave fans wondering:

Maybe the most daunting question to come out of this season is this one: What if this was the Cavs best chance at winning a title?

While it is nice that Las Vegas odds makers have installed the Cavs as favorites to win the title in 2016, that is still a long way off and far from a certainty.

That is a long, long road that needs to be navigated before the Cavs and their fans reach early June and the start of the 2016 NBA Finals. Maybe having been so close and seeing the title slip away will bring everyone back hungry, maybe Blatt will be even stronger as a coach now that he’s been through the NBA once, maybe Irving can stay healthy throughout the playoffs, maybe, maybe, maybe.

But we all thought that 2007 was just the beginning of the good times for the Cavs, but then it took them eight years to make it back to the NBA Finals. A lot is going to happen in the next 12 months with this team and there are no guarantees.

“Not every story has a happy ending,” Blatt said after the final loss. “It doesn’t mean it’s a bad story. This was not. This was a good story.”

Blatt’s right, of course, as he usually is on such matters. One can’t look at this past season and not see it as a good story, one where James came home and helped the Cavs become relevant again in the NBA.

And just because this year’s story didn’t have a happy ending, that doesn’t mean the sequel won’t be even better.