Archive for the category “controversy”

Source: Browns may have made regrettable mistake 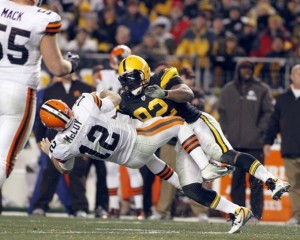 As we pointed out yesterday, the Cleveland Browns now find themselves under the spotlight for their mishandling of Colt McCoy following James Harrison’s illegal hit during Thursday night’s game.

According to ESPN: the team’s handling of the situation is being labeled as a “blatant system failure” by a union source because the team’s medical staff did not conduct proper testing before sending McCoy back into the game.

The NFL and the NFL Players Association’s chief physicians — Dr. Elliott Pellman and Dr. Thom Mayer — have conducted the initial review, sources said, and both the league and the union will continue the process that one source says will “likely” be the catalyst for the placement of independent neurologists at each game site in time for the 2012 season.

It will be interesting to see what the NFL comes up with as they review the situation. If it leads to having an independent neurologist at each game, then something good will have come out of the situation.

Short-term, however, it raises questions about what the Browns are up to on the sidelines during the game. We still find it very hard to believe the team willingly put McCoy back into the game knowing that he had a concussion – there’s no benefit to McCoy or the team under that scenario.

And making a mistake is not the same thing as having malicious intent.

But if the NFL can determine the team intentionally ignored McCoy’s symptoms and put him back in the game knowing that he had a concussion, then the franchise needs to be fined heavily – starting with coach Pat Shurmur.

We understand that things can get hectic on the sidelines, especially at the end of a close game against a division rival, but the coach’s job is to know what is going on and act accordingly. The player is always going to want to go back into the game – it’s the coach’s job to make sure the player is not putting himself or the team at risk.

Lost in all this is the fact that Harrison’s hit was clearly illegal and now he may face a suspension.

According to ESPN, the NFL will look at the hit and, at the very least, fine Harrison. If he is suspended for a game or two, Harrison would be the first player suspended under the league’s crackdown on player safety violations.

“Our staff is going to be looking at that play along with every other play that happens this weekend, and they’ll make their decisions,” NFL Roger Goodell said.

Fines are obviously not working, so maybe a suspension that could cost the Steelers as they position for the playoffs, will finally do the trick.

What if we told you that, against the Steelers the Browns would:

The Browns should win, right? Well, that’s what they did Thursday night and it still wasn’t enough, as Cold Hard Football Facts points out:

Cleveland forced 3 turnovers while surrendering just 2 (4-2 if you count Pittsburgh’s meaningful turnover on downs). Cleveland forced Roethlisberger to the sidelines for a whole 6 minutes of game time (an eternity for Ben), leading Ben to limp and slide through the second half. Cleveland held Pittsburgh to its second worst 3rd Down conversion rate of the season (25%) while converting 43.75% of their own. Cleveland was the more disciplined team as Pittsburgh committed 6 extra penalties for 43 extra yards. And Cleveland forced Pittsburgh to travel 29.71 yards for each point they scored, the least efficient scoring output from Pittsburgh since Week 1 (and this a team that is known to be inefficient this season coming in at No. 23 in the league in Scoreability).

Just another fun day in paradise for the Browns.

Finally, several of the early season darlings of the NFL have crashed back to earth.

Detroit is 3-5 (which should be 2-6 after the refs somehow missed a blatant face mask penalty at the end of Sunday’s game against Minnesota) after its 5-0 start.

Just wanted to point that out.